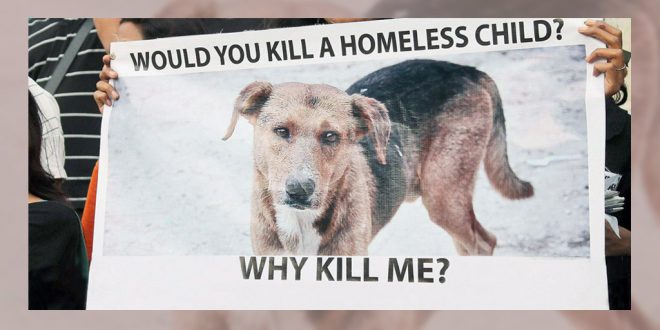 Supreme Court To Give Strict Punishment For Killing Strays

Finally, the Supreme Court of India has agreed to look into an incongruity in law which constitutes only a Rs. 50 fine for killing strays, whereas killing a pet animal can cause a jail term of up to 5 years.

Discrimination against punishment for killing strays

(IPC) Indian Penal Code does not exclusively recognize offenses against animals. Offenses such as, killing or maiming a pet animal are dealt under category – “property” of people. This clearly excludes stray animals as they are not considered as “assets.”

Killing strays is covered under “Prevention of Cruelty to Animals Act” that only includes a fine of Rs 50.

“It does not behove a civilized society that the only punishment for hacking a puppy to death is a paltry Rs 50 fine and no jail term. It flies in the face of our Constitutional duty under Article 51A (g), which enjoins us to have compassion for all living beings and not just humans,” advocate Prashant Bhushan, standing for an NGO, told a bench of Justices Dipak Misra and Siva Kirti Singh.

IPC also discriminates between pet animals and fixes punishment as per their values. For Example: As per Section 428 of IPC, a maximum of two-year jail term can be given to a person for killing or maiming an animal of the value of Rs 10, whereas, Section 429 says, the punishment for harming an animal of value of Rs. 50 or more can get a person a jail-term up to 5 years.

Here is the comparison:

Whoever commits mischief by killing, poisoning, maiming or rendering useless any animal or animals of the value of ten rupees or upwards, shall be punished with imprisonment of either description for a term which may extend to two years, or with fine, or with both.

Section 429 – Mischief by killing or maiming cattle, etc., of any value or any animal of the value of fifty rupees

Whoever commits mischief by killing, poisoning, maiming or rendering useless, any elephant, camel, horse, mule, buffalo, bull, cow or ox, whatever may be the value thereof, or any other animal of the value of fifty rupees or upwards, shall be punished with imprisonment of either description for a term which may extend to five years, or with fine, or with both.

Considering these patently antiquated and unfair yardsticks, the SC on Thursday agreed to hear a plea seeking strict action for killing strays by introducing a separate provision for such crimes. The justice bench issued a notice to the Centre seeking its response for strict punishment for animal cruelty and to regulate pet shops.