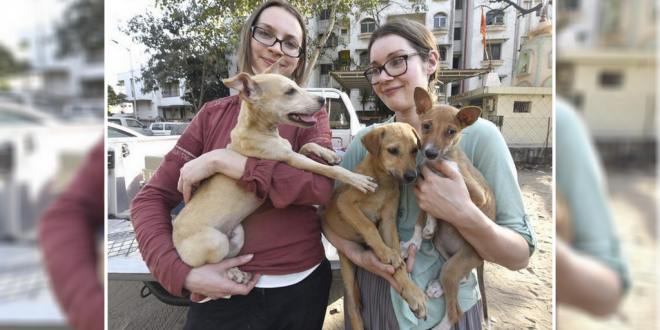 Leo, Raja and Rani- three stray dogs from the city will be heading for Germany on Monday. Courtesy, Marie Rossier, a Hamburg-based lawyer and her sister Diane. Both of them have adopted the stray dogs from India. Marie and Diane were in the city on Sunday for completing the paperwork required for animal adoption.

For Marie, it is her second adoption of stray dogs from India. Earlier, when she visited Khajuraho, she had adopted a sick puppy. When asked why adopt stray when Germany is known for distinct dog pedigrees? Marie said that she was pained and moved by the appalling condition of stray dogs at the places she visits in professional capacity.

“There are so many misconceptions about the stray dogs and cats. Once we start getting to know them they can also be trained. And our experience has been good. We encourage citizens to adopt the strays,” she said.

In total, I have adopted about 25 dogs and five cats from Belarus, China, India and Spain in last few years. I have a small animal shelter at my home. I treat them and if any animal lover is willing, I give them for adoption. It is a win win situation as animals get home and Germans also identify the unique dogs who I believe are equal great pets, said Marie.

Harmesh Bhatt of Asha Foundation, said that the initial plan of adopting four dogs. All of whom are less than six-month-old. But one of them was not medically fit for travel.

“They were rescued from Amraiwadi, Naranpura and Ghodasar by our volunteers. Marie was coming to India for a conference in Delhi and had communicated to us about her wish to adopt the strays two months ago. It’s a welcome trend. As animals get better facilities,” he said.

Bhatt said that the city has a tradition of taking care of stray animals.

“From last few years we have seen number of cases where foreign nationals have adopted dogs. We however have represented for setting up blood testing lab for animals for international adoptions At the moment, the samples are sent to Dubai,” he said.

Why do Indians hesitate to adopt Indian stray puppies?