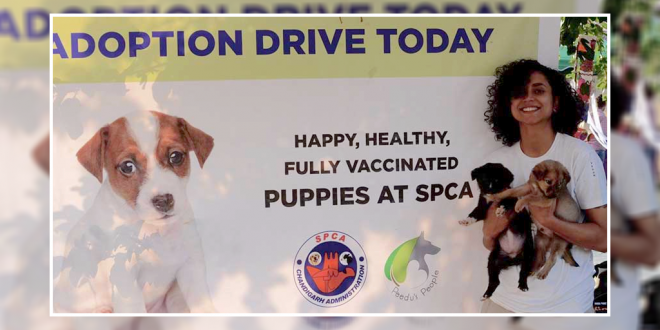 Various organizations from all across the city came together to participate in the two day event “Chandigarh Vegan Food Carnival” that was held in UIET Panjab university on 14th & 15th April, 2018.

The event was organized by the Rotaract Club Chandigarh Himalayan. The  objective of the event was to raise awareness regarding “Veganism” and “Animal Welfare.” It was flagged off by a performance by The Rotaract Himalayan Band.

The Club President, Priya Krishnan said that their motive to organize this event was to make people aware of the importance of animal welfare. The Rotaract club has been organizing social welfare events in the past and the funds collected were used in their project “Happy Schools.” The project deals with the refurbishing of schools in and around Chandigarh that lack proper upkeep.

The chief guest at the event, the former mayor of Chandigarh, Asha Jaswal stressed the importance of youth activism saying that “Unless the youth involves itself in activism, the social stigmas cannot be broken.”

Apart from various food stalls at the event, there was an interesting stall housing with little puppies reading, “The Puppy Adoption Center”. It was set up with Peedu’s people – an NGO that works for the welfare of stray animals and strives to be the voice for the underdogs.

The Rotaract Club collaborated with the SPCA, (Society for the prevention of cruelty against animals) – a government based animal shelter for the adoption center. Inder Sandhu, founder of Peedus People shared the great success that they have experienced at the SPCA in Chandigarh through the tireless effort of the volunteers who work around the clock to rescue, rehabilitate and get puppies adopted.

“Today we are happy to say that through our program at the SPCA we have an effective Parvo and Distemper ward where after incubation and treatment of rescues we are seeing happy healthy puppies emerge and get homes. It is important that people learn the importance of adopting local animal breeds instead of getting puppies from breeders. This is where the real genesis of compassion lies. Compassion towards the voiceless. Veganism has its roots in unleashing our soul in ways we only become aware of once we have departed on this journey. What often starts off as an effort to be kinder and healthier, has benefits that our minds do not comprehend when we dip our toe in the sea of compassion,” highlighted Sandhu.

Watch: A White Dog Abandoned in The Desert Found Living with A Coyote Group