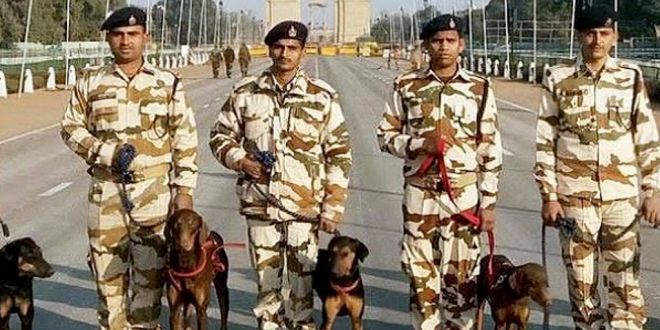 The Indo-Tibetan Border Police (ITBP) has raised a new unit of assault dogs, which have been trained to work in packs of four to pin down enemy troopers if the force’s patrol teams are attacked, officials said on Thursday.

The first batch of about half-a-dozen dogs completed successful training recently at an ITBP academy in Bhanu near Chandigarh, and the canines are now being sent to various “important and sensitive” bases of the paramilitary force, including those along the Line of Actual Control (LAC) with China,
they said.

The new team of canine soldiers includes the ferocious Belgian Malinois and the German Shepherd breeds, and the force proposes to train a total of 30 dogs in the first go.

“These assault dogs have been trained to attack in a team of quartets, which means that four dogs will act in tandem to bring down the target be it a terrorist or any element that may harm the troops during patrolling,” a senior ITBP officer PTI.

“This canine strategy has never been used in the world. Even the Israeli K9 (canine) Oketz have never trained dogs to attack in a quartet arrow-head fashion,” he said.

The officer claimed that the mountain-warfare trained ITBP is the first force in the world to have such a canine unit.

“The dogs of this new unit are trained to seek, track, chase, pin down and hold the target, till commanded to let go,” he said.

“The lead dog in this double-pair group is trained to attack the neck area or the jugular vein of the main attacker and the rest three dogs take care of other members of the enemy side,” the officer said.

This dog squad can also operate in the dark as they have a “very strong” sense of smell, he said.

Keeping in mind the requirements of this new unit, there will be two handlers deputed for one dog, the official said.

The ITBP has a full-fledged canine squad that is used by its troops deployed in anti-Naxal operations and other law and order duties to sniff, track and detect explosives and suspects.

The new unit, another officer said, has been raised keeping in mind the challenges of a group attack on an ITBP patrol such as during border domination
duties.