The Golden Retriever and Labrador Retriever are similar dogs. However, they are different in many aspects. They have been the first choice as a family dogs for their sweet nature and caring behavior. Differences start showing in their energy levels.

The golden retriever dates back to the 19th century and is an origin in Scotland, which was a part of Great Britain. A clever nobleman named Lord Tweedmouth 1 desired a gun dog, but he wanted it to be different from the others.

With his experience in dog breeding, he created the golden retriever, a part of many homes today. The first-ever breed of golden retriever was a concoction made of the now-extinct tweed water spaniel, the ‘then golden retriever, the Irish setter, and the bloodhound. The gun dog could sniff the prey and collect it without killing it.

It is a reason that in the world of gun dogs, this dog breed is identified as ‘soft mouth.’ After half a century of engineering the perfect gun dog, the son of Lord Tweedmouth sailed the dog across the Atlantic sea to America, where the popularity of this dog began.

The Americans fell in love with not only his working skills but for his grace and good looks. The golden retrievers’ popularity grew twofold when the 38th president Gerald Ford of the United States adopted a golden retriever named Liberty. She became a piece of regular news as was shown on the television.

The Labrador retriever was best known for collecting ducks, fish, and various small water creatures. The popularity of the Labrador retriever rose when the British loved his nature and looks and started sailing him to Britain. Though the dog is named Labrador, it is not from Labrador but a newfound land.

The golden retriever and the Labrador retriever have similar temperaments. They are kind, pleasant, obedient, affectionate, and friendly dogs.

After the golden retriever has taken his hourly workouts, he tends to chill. After that, he certainly will play, jump around, and exercise.

However, in between those, he will not like missing out on snoozing sessions and cuddling with his family. The golden retriever would enjoy a day out playing as much as he would enjoy a day in complete relaxation mode.

The Labrador retriever is known for being energetic and cheerful. However, his need to be entertained is longer than the golden retriever. This is because labradors require long and more intense exercise. Apart from this, they need additional mental stimulation.

It cannot be easy to tire out a Labrador. Even though he likes to cuddle, he gets too busy to remember.

Pomeranian Dogs – Everything You Wanted to Know About 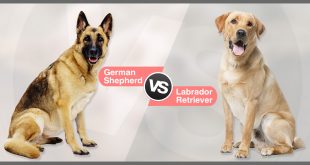