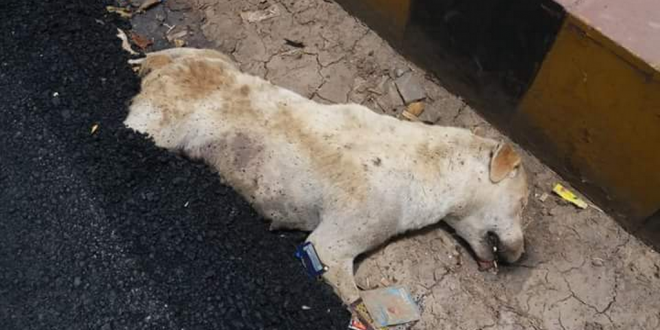 A Dog Buried Alive While Sleeping On A Road In Agra

A shocking incident has come to light in the Taj city Agra after a road crew buried a sleeping dog under bitumen and built a road over the dead body of the dog.

The incident came into notice when the local residents and passerby saw the half-buried body of the dog on Agra’s Fatehabad road.

The anger of the people prompted Agra’s Sadar police department to register an FIR against unknown persons. The SHO said they were trying to identify the accused.

“A fresh layer of coal tar was being laid on the road from Phool Sayyed crossing towards the Circuit House and the Taj Mahal. A dog was sleeping on one side of the road. Instead of chasing the animal or removing it physically, burning coal tar was poured over it. Later, a road roller crushed the animal. The body has now disappeared,” social activist Naresh Paras told PTI.

Road construction company RP Infraventure Pvt. Ltd. constructed part of Fatehpur road over a dead dog in Agra. The dog’s body was removed after police complaint was filed, PWD has also sent a notice to the company pic.twitter.com/rivppo9ZxD

A case under the Prevention of Cruelty to Animals Act was filed with the police. Area residents demonstrated outside the Sadar police station in Agra to demand action against the “dog killers.”

The project’s contractor in-charge said that an inquiry was underway and “those found guilty would be shunted out as punishment.”

Angst in Social media after dog buried alive in Agra

The pictures of the half-buried dog were shared on Facebook & Twitter early on Wednesday. A number of people reacted angrily and sought action against the people responsible for the incident.

Here’s how people reacted to the barbarity on Twitter

They poured ‘Hot Damar’ over a sleeping dog in Agra; and that poor died not able to bear the pain. Animal love is also a facade of Ajay Bisht.

Yogi ji we can see that you didn’t give up the ‘Maya(माया)’ but definitely the ‘Moh(मोह)’ of the living! @PetaIndia pic.twitter.com/2fItpLo9AK

This is pathetic example of civic bodies and construction companies working style in #UttarPradesh | A road was built over a dog’s body near #TajMahal in #Agra. Looks like they have no eyes but ears. Police has filed a case against construction company pic.twitter.com/jAy35apn2N

Shameful act in Agra. Picture reveals, negligence of those who did this. Must be punished for killing innocent dog pic.twitter.com/NQKwHyjdPI