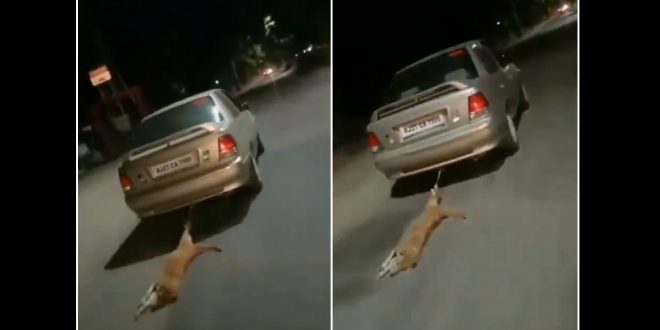 Udaipur Man Booked For Dragging A Dog Behind His Car

A shocking incident from Udaipur city has come to light where a man tied a dog to the trunk of his car and dragged him for kilometers in the Kelva area.

The video of the incident went viral over social media and police were alerted about it. The police claimed that the video was shot around the Shobagpura area around 5 days ago. The dog’s dead body was also found in the same area last week.

drove all around shobhagpura 100 feet road udaipur, when people tried

to stop him, he threatened them and ran away. Please raise your voice

The police stated that the accused Babu Khan has claimed that he found the stray dog dead outside his garage. The corpse smelled bad and looked infected which is why he didn’t put the dead body in the trunk and tied it behind the car. He was dragging the dead body to dispose of in the forest. This is when someone driving behind him shot the video. The locals, however, alleged that the dog was alive when it was being dragged.

Kelva Police station officer DP Dadich said that the dog’s body was sent for post-mortem and the report revealed that the dog died due to trauma. The accused was booked on Sunday but granter bail later by a local court. The police have not submitted the charge sheet yet and waiting for the investigation to be over.

Khan has been booked under IPC Section 429 (mischief by killing an animal of Prevention of Cruelty to Animal Act). The social activists have called the incident as shameful and as an inhuman act.