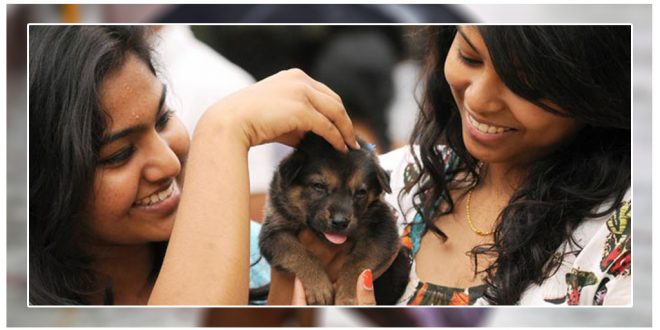 People of Indore city are setting an example of compassion and care by adopting stray dogs in the city. There are numerous stories of stray dogs being adopted daily in the city of Indore.

Among those who have changed the lives of stray dogs around them is a 21-year-old Rumanshi Khare, a resident of scheme no 78, who had received a stray dog in an injured condition from a friend. The dog, whom she later named ‘Labbu’, had met with an accident which had left his hind legs paralyzed. The doctors too had lost hope but as a result of Rumanshi’s efforts, Labbu was able to walk again after two months of constant medication and treatment.

“I massaged him with medicated oils, gave him the oral medicines prescribed by the doctor and treated him with a hot water bag every day. I also own three other healthy stray dogs. Seeing them, Labbu also made efforts to walk and after two months he was finally able to stand on his feet,”said Rumanshi Khare

Adopting stray dogs is on the rise

Similar is the story of another stray dog, who suffered from epilepsy, and had frequent bouts of epileptic attacks. English professor from the city Deepa Vanjani took the dog in and took care of him. Though his disease could not be cured, he definitely received love and warmth in the last few days of his life.

Vanjani said, “I also had another stray bitch that became pregnant and delivered puppies in my home. She was also in bad condition when I got her. But gradually things improved and she was healthy.”

Another per lover, Pratha Tiwari, also has two stray puppies in her home that she picked up from her neighborhood.

A member of an NGO from the city Vaishali Shah also has around 200 dogs at her animal shelter close to her home near Jhalaria village among which many are disabled. A resident of Dewas, Roopa Patwardhan also runs a shelter close to her home where she has around 60 dogs. Patwardhan also feeds stray dogs in her locality, apart from those at her shelter, every day in the morning before setting out for work.

Saving one dog will not change the world, but surely for that one dog, the world will change forever.