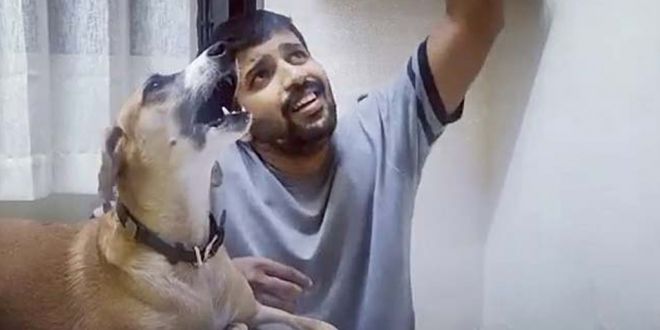 The internet loves musically inclined dogs. This weekend, a dog named Zoe, from the Indian city of Mumbai became an overnight social media celebrity of sorts, after her human put up a video of the two of them singing. Social media users are in love with their jugalbandi, an Urdu word for a duet performance of two solo musicians, in Indian classical music.

Mumbai-based comedian and writer Rohit Nair posted the video on Facebook and Instagram on July 30, and both and his pet seem to have hit the right notes, as the video is going viral. According to the latest update on Nair’s Facebook page, they have reached 1 million views.

The video shows how Nair sand some notes that Zoe quite seriously imitated. Nair teasingly named the composition ‘Raag Bhaokaar’

The video garnered many reactions on both the social media platforms, with people commenting about Zoe’s love for music, and had other dog owners planning to try the same with their pets.

Instagram user @pj_rao tweeted: “Omg how she is so talented! Perfect pitch.”

And, @manib1072 commented: “I don’t know how many times I have watched it… had a hearty laugh after ages.”

Zoe is Nair’s adopted dog, and he often features her on his Instagram feed. This is not the first time they are singing together, here’s another duet performance, where the two attempt to sing the 1994 pop song ‘Kiss from a Rose’, by Seal. Nair (@sobertooth) wrote: “When we are not discussing politics, Zoe and I do a bit of singing. Presenting to you Snoop Dog and Sobertooth – together we are the Howl Sisters.”