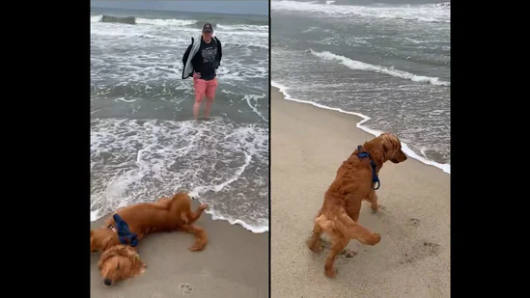 Watch this dog’s hilarious reaction at beach that went viral

Recently, a series of posts shows a dog named Shadow and his adventures around the beach and how he conquered his fear of the ocean.

Are you looking for some inspiration to get over an irrational fear? Well, this adorable dog will help you. The video posted on Instagram shows how this dog got over his fear of water while he was out on a beach. The clip will likely make you feel proud and laugh about this pup.

The video is shared on an Instagram page called ‘ulysses.shadow.grant’. A series of posts show a doggo named Shadow and his adventures around the beach. It also shows how he conquered his fear of the ocean.

The caption says, “My humans took me to the beach! But why is the water chasing me?! It wouldn’t stop! I’m NOT a fan!” The caption goes well with the video. The clip shows Shadow getting surprised by the waves and running away from them.

Since the little pup wasn’t a fan of the ‘chasing water’, he took on another role at the beach. “I am on lifeguard duty today… keeping a close watch on my people!” says another post.

However, this didn’t last very long because Shadow took on his fear of the waves and returned to the water.

The whole experience turned out so well that Shadow turned into a fan of the beach. “Workin’ on my retrieving skills in the ocean! I think I’m pretty good… and my humans said they were proud of me for being so adventurous!” details the caption.

All these posts have collected several reactions and likes.