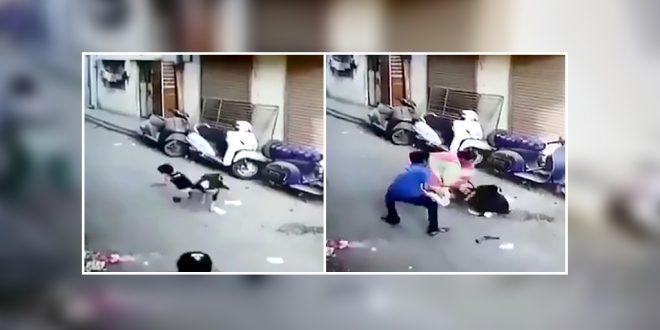 With stray dog menace rampant in Ahmedabad and Municipal Corporation not taking enough action, it has led to a striking increase in dog bite cases in the city. Small children are the most attacked prey of street dogs. Here is a horrifying moment when a two-year-old toddler got brutally attacked by a street dog.

WARNING: VIDEO IS GRAPHIC IN NATURE

The young toddler was wandering down a road in the city of Jamalpur in Ahmedabad when she got attacked by a black dog. The video footage was recorded by a nearby ATM. It can be seen in the video that the toddler was walking away from the dog when the dog chased down the toddler and grabbed her clothing with its teeth. Dog continually thrashed her around by wildly shaking its head – which according to experts is an action intended by predators to snap its prey’s back or neck.

Thankfully several bystanders immediately rushed over to pull the toddler free. Others tried to hit the dog to make it lose its grip on the little girl.

The little girl is currently in recovery and being treated in a hospital with reportedly multiple bites on her legs.

Situations like these have made residents furious. Also, the authorities are doing little to tackle the problem of aggressive stray dogs. Residents have reported that many streets in the area have become dangerous to walk along as stray dogs chase pedestrians and cyclists. Multiple bite cases have been reported as well, still, there hasn’t been enough steps taken by the officials to deal with the increasing stray dog issue.

Is sterilization program an instant solution for issues like these? What solution would you propose?