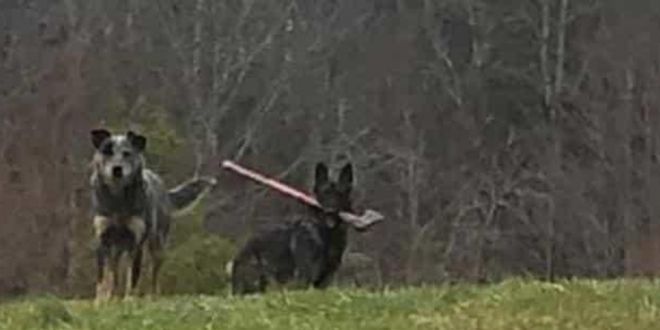 In today’s edition of bizarre images on the Internet, here’s a post by a mailman who encountered something highly unusual… a dog holding an axe in its mouth. The images of the scene, shared on Facebook, have now created quite a stir. The post has also prompted people to come up with creative and hilarious responses.

Tim Smith shared the images about two days ago on December 18. Since being shared, it has captured the attention of many – so much so that till now it has been shared over 2.7 lakh times.

“Saw this on my mail route today. There are a lot of reasons why your mailman might not deliver your packages, and this is one of them. I can handle a dog, but not a dog with an axe,” Smith wittily wrote.

The two images he shared show two dogs standing afar with one of them holding a sizeable axe in its mouth.

From trying to guess the perspective of the dog to calling the incident funny, people flooded the post’s comments section with all sorts of responses. A few also wrote how they wished their furry babies could do this.

“Maybe he wants to be a fireman… err… firedog,” wrote a Facebook user. Well, that makes some sense. Doesn’t it?

“This is so funny,” expressed another. This notion was expressed by several others too. “That’s funny, lol. Maybe they were out getting their x-mas tree,” joked a third.

Several also tagged others to show them the post.

Smith said that this is one of the most strangest things he has seen till now, reports WKYT. He also added that the dog is actually friendly and is often seen roaming around carrying sticks.