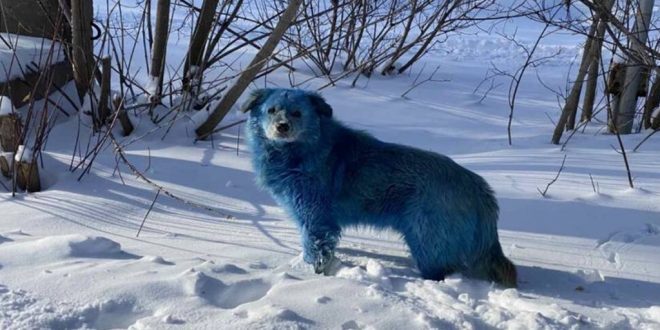 Several pictures of a pack of stray dogs with eye-catching blue fur are making rounds on the internet, triggering a variety of reactions online.

While many suggested that canines, spotted near an abandoned factory in Dzerzhinsk, might have been victims of a cruel prank, a Daily Mail report said that the dogs got the strange coloring due to exposure to chemical waste from a nearby abandoned factory.

Pictures taken by residents, which have now gone viral online, show the blue dogs wandering through the snow-covered streets in the city of Dzerzhinsk.

Many who came across the pictures also expressed concern over the dogs. While others also made memes and jokes about the strange colored animals. Take a look at some of the reactions here:

omg.. I hope they will be okay and that it won’t affect their health 💛stay safe doggies❤️

These dogs got the smurfs before Gargamel and Azrael.

According to The Moscow Times, the dogs may have been exposed to chemicals like plexiglass and hydrocyanic acid from the factory, which gave them a blue color.

Andrey Mislivets, the bankruptcy manager of the plant, told Russian state-owned domestic news agency RIA Novosti that the dogs might have found leftover chemicals from the premises of the factory, which closed down due to financial constraints six years ago.

Nizhny Novgorod animal rights activists confirmed to the news agency that animals were not in danger as all seven of them were examined by veterinarians.