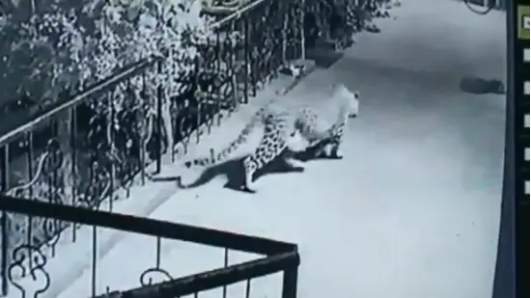 A frightening moment involving a leopard and a pet dog has now made it way online and left people scared. The video shows the leopard entering a house to snatch away the pet dog sleeping outside. The incident took place outside a house in Bhuse village of Nashik, Maharashtra.

ANI took to Twitter to share the video which they wrote is captured on a CCTV camera. “Maharashtra: A leopard hunts a pet dog sleeping outside a house in Bhuse village of Nashik,” they wrote while sharing the video.

The video shows the leopard walking stealthily towards the dog sleeping at the doorstep. It finds its moment and attacks the dog, grabbing it by the neck with its jaws. Eventually, the leopard runs away with the canine.

Take a look at the scary clip:

The clip is now being shared by many across Twitter and has gone viral.
Source: Hindustan Times, Not edited by DogExpress staff