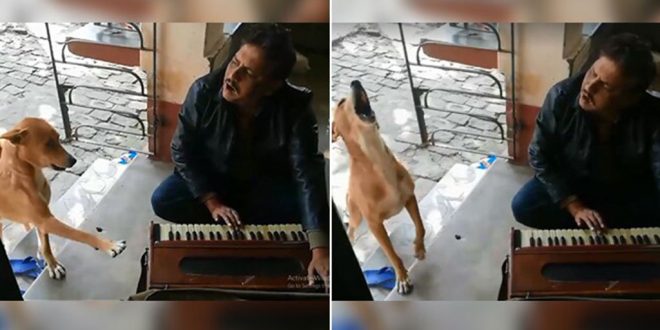 Remember Ranu Mondal and Himesh Reshammiya’s song Teri Meri Kahani from the film Happy Hardy and Heer which went viral? Well, the song is going viral again for the oddest reasons and it will definitely leave you laughing hard.

A video of a man singing the song and playing Harmonium has gone viral on the internet, but not for the same reasons that you are thinking. In the viral clip, a dog can also be seen singing along with the man in the video.

The video, which was shared with the caption, “Early morning riyaaz”, the man can be heard singing the song as the dog howls in sync with him. Though the internet was appalled by the bad singing skills of the man, they fell in love with how the dog accompanied the man by singing along with him.

After the video was shared on the social media, netizens quickly took to the comments section to drop in their views about it. While some were amazed by the dogs skills and not so much by the man, others poked fun at the whole situation.

Here’s what netizens are saying about the video: