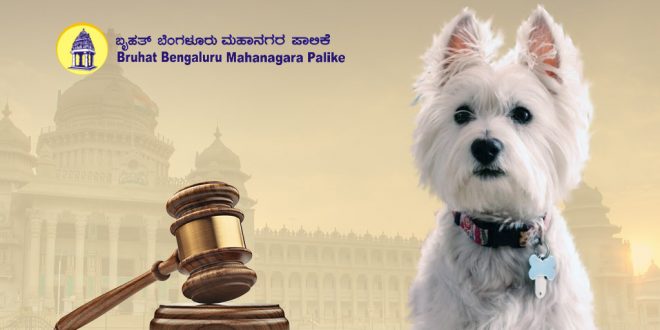 As per new pet by-laws proposed by BBMP (Bruhat Bangalore Mahanagara Palike), which is quite likely to be approved – only one pet dog will be allowed per flat in Bengaluru. The pet dog should have a collar with a badge and microchip. Another clause added by BBMP would now make it compulsory for dog owners to clean up after their dog. Aggressive dog breeds such as Pit Bulls, Hounds, Rottweilers must be muzzled while taking them to public places such as parks or society premises.

Some more new rules have been proposed in the draft created by BBMP and submitted to Urban Development Department (UDD). Since long, there haven’t been any pet registration laws in Bengaluru similar to New Delhi, Chandigarh or Chennai, where pet registration has been made mandatory by respective Municipal Corporations. However, as per section 344 of Karnataka Municipal Corporation Act, keeping and feeding animals and birds without the permission of Municipal commissioner or concerned officer is strictly prohibited.

It states – No person shall,

(a) without the permission of the Commissioner or otherwise than in conformity with the terms of such permission, keep pigs in any part of the city;
(b) keep any animal or bird on his premises so as to be a nuisance or so as to be dangerous; or
(c) feed or permit of be fed on filth any animal, which is kept for dairy purposes or may be used for food.

The Animal Husbandry Division of BBMP has issued over 2,100 pet licenses in Benglauru so far. Initially a draft was submitted by BBMP with modified by-laws for pet dogs licensing in 2013, however, this was not introduced due to objections from AWBI (Animal Welfare Board of India). The UDD sent back the draft with some observations aligned with objections by the AWBI. Taking those into considerations, BBMP has re-drafted the pet by-laws and sent it to UDD for approval.

Do you agree with the proposed pet by-laws by BBMP? Share your thoughts in the comments below!