Every morning, a couple of days after the statewide curfew was clamped in Punjab, international hockey player Jasjit Singh Kular, who hails from Sansarpur village in Jalandhar, has started his day at 5 AM.

It’s not to train, but to cook chicken soup and prepare a mix of soaked soya chunks and store-bought dog food to feed a large number of stray dogs on a stretch along the Grand Trunk road, 500 meters from his house. Under normal circumstances, these strays would find food from the leftovers at restaurants and highway dhabas, but the lockdown doomed them to stay hungry.

Kular, who has three dogs of his own, knew about the Jalandhar-based Animal Protection Foundation that rescues stray dogs. When the lockdown was enforced, he got in touch with them to feed the strays. 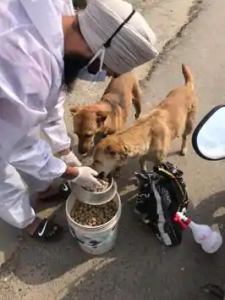 “Our foundation mainly focuses on treating animals. But we also started feeding stray dogs during the lockdown. While residents feed the animals in residential pockets, we focused on those near highways and commercial areas,” says Shrist Bakshi, 32, who started the foundation three years ago.

Kular roped in five friends — an athlete, a musician, a photographer, an IT professional, and a librarian — and joined the foundation’s efforts. Together, they feed around 500 dogs on 25-km road stretches in the city.

In all, the foundation feeds 1,000 strays with the help of 16 volunteers, including Kular and his friends.

“Ten days ago, I started posting pictures on my Facebook account. This drew the attention of many people I know, and now they are also contributing,” says Kular, who made his India debut at the 2014 World Cup in the Netherlands.

“It takes us around four hours in the morning (to complete the rounds). The six of us split up into three groups and daily cover around 25-30 km of road stretch,” says the 30-year-old.

“We buy bags of soya chunks and dog food from the market. Our daily requirement is around 30kg. We prepare soup using 1kg chicken, but don’t give the bones to the dogs as this causes fights between them. We also need around 150 chapattis and some packets of bread, which are provided by some households in my neighborhood. We use disposable bowls for feeding the dogs,” says Kular.

The foundation tied up with a local pet shop for the packaged dog food, which maintained its supply through the lockdown. “We put the dog food in a lot of water before starting our feeding routine, so that they can get water with the meals,” says Kular.