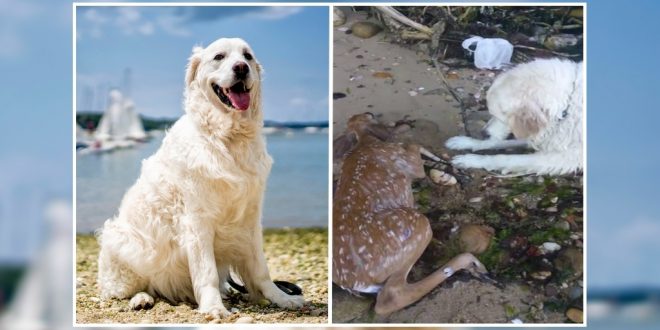 Storm, an English golden retriever, was out for a walk Sunday morning along the Long Island Sound with his fellow dog Sara and his owner. Mark Freeley (Storm’s owner) began recording as his Golden retriever, Storm, ran into the water to fetch the animal.

The video captured the weakened deer begin to run away after being brought to shore but collapsed as Storm followed it.

“He started nudging it with his nose and started pulling it to make sure she was gonna be OK,” Freeley said.

As Freeley called animal experts to retrieve the fawn, the young deer became spooked and darted back into the water.

Freeley and a representative from Strong Island Animal Rescue waded into the water to save the confused fawn a second time. The men used a rope to reach the deer and pull it back into the shore.

The deer was transported to an animal care shelter where it is recovering. The deer was reported to be covered in ticks and suffering from an eye injury.