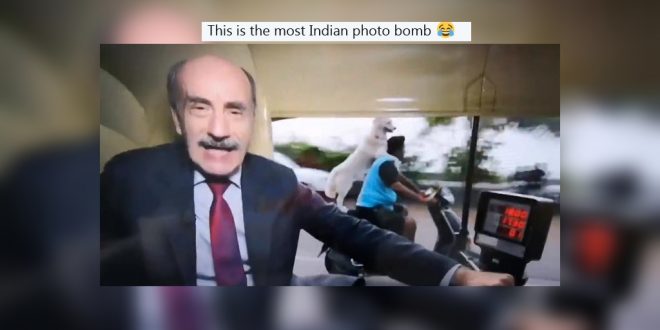 A bike-riding dog became an instant internet sensation during a BBC program’s shooting in rickshaw showed a dog riding behind a man on a bike.

BBC presenter Tom Brook, who was shooting in India for an episode of “Talking Movies,” was ending the episode while riding an autorickshaw on the streets of Mumbai.

During the last few moments on the camera, a dog riding pillion behind its owners got caught in the footage. The video went viral instantly and amused many people.

The dog was seen balancing itself on its hind legs while keeping its front legs on the shoulder of its owner.

Check out the video tweeted by this guy:

This is the most Indian photo bomb 😂 pic.twitter.com/dtAcmByofW

The video got many comments and retweets from people all around the globe. Many posted with following comments

@mycrotchetyluv omg is this that dog you saw

This is one of the reasons I love going back to India. Stuff like that is just normal 😂 https://t.co/fvEMvzUHo4

I swear, this happens only in India. Haha. https://t.co/Dvo22UxUV6

I swear, this happens only in India. Haha. https://t.co/Dvo22UxUV6