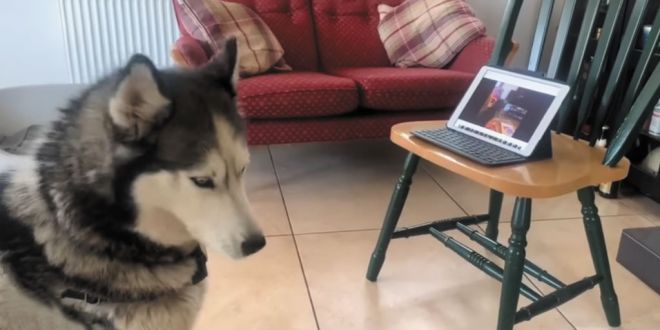 With the entire world under lockdown to contain and prevent the spread of the novel coronavirus, the only way to keep in touch with your family and friends is by video calling them. But if you think that only humans are the ones keeping in touch like this, you are wrong. A video of two dog best friends having a chat via a zoom call in Ireland is going viral.

The video, which was shared by Jeremy Howard, shows his dog Laika having a heart-to-heart with its best friend, Henri. The zoom call was set up by Jeremy between his pet and Henri on April 6. He was able to record snippets of the conversation between the two pets.

Howard told Storyful, “Laika and Henri are best friends. They miss each other quite a bit, but are getting pretty handy at the video messaging.”

In the video, you can see Laika having a conversation with Henri. And, if you look carefully, you will see, on the other end of the call, Henri jumping across the room in excitement.

The adorable video of the two dog BFFs went viral and the internet cannot help but say aww. Have look at some of the comments.

A Twitter user after watching the video tried to decode what the dogs were saying. He wrote, “I’ve had huskies most of my life, they’re very chatty. This is more like talking than howling. I don’t know the breed on the other side is, but I think the husky is saying, ‘Something is wrong, I don’t know what it is, I don’t like it.’ He certainly recognizes his friend’s voice, but easily notices how the sound isn’t quite right. It’s upsetting him too because he knows who it is and can’t find them. I’ve talked to my pooches via FaceTime before and they get frustrated, sound just like this fella, and my start punching the phone.”

Another user wrote, “Interesting, is howling something that dogs do when in the company of the other dog OR is he howling because he doesn’t get what’s going on?”

Isn’t this the best thing that you have seen?