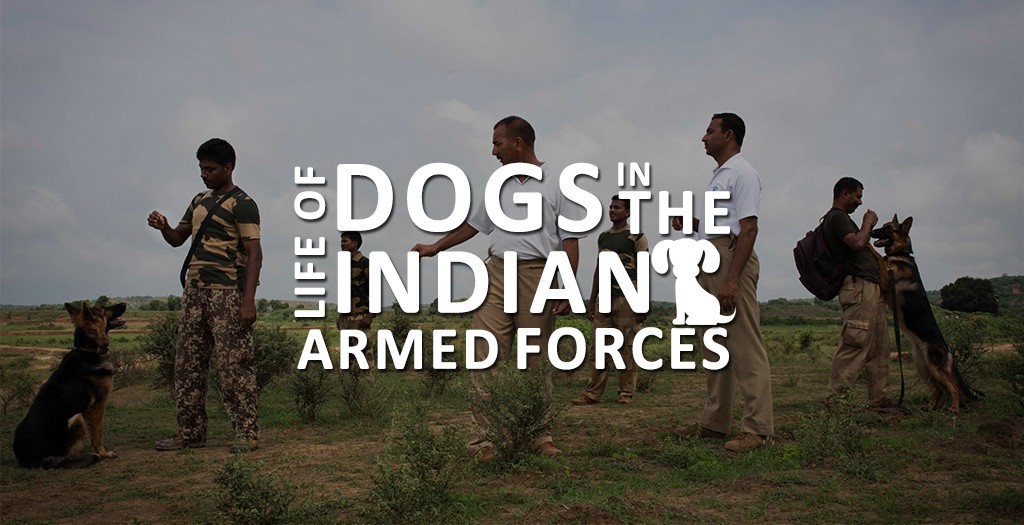 Life Of Dogs In The Indian Armed Forces

With all the recent events, highlighting the efforts of dogs in service, we decided to share this inspiring story about the life of dogs in the Indian Armed Forces, covered and captured beautifully by Sharbendu De.

Life of Indian Army Dogs: A Story by Sharbendu De

It’s twilight. The Esplanade bus terminal — from where state and private buses for all of West Bengal depart — is teeming with people. There are porters carrying loads, office-goers rushing to catch buses, and ladies in starched sarees humming along to a backdrop of a typical cosmopolitan Indian city.

Gypsy, a well-trained 2-year-old German Shepherd police dog, is surrounded by this frenzied chaos. She remains calm with Mohan Mondal, her handler, by her side. Mondal cones his hand before Gypsy’s nose, directing her to pick up a scent from a suspicious object.

He then commands her Sungho dhundo, which translates to “smell and detect.” Amidst the myriad odors and fragrances wafting in the air, including the stench from a pile of garbage and drains, she successfully detects the source.

A year ago, both Gypsy and 46-year-old Mondal, a constable with the Kolkata Police Dog Squad, were sent to National Training Centre for Dogs (NTCD), India’s premier dog-training academy in a sleepy town called Tekanpur in the central Indian state of Madhya Pradesh.

Second, to the Indian Army, which has its exclusive dog-training academy, Border Security Force trains all dogs deployed into various wings of the Indian armed forces.

He insists on developing an inseparable bond with the dogs. “The dogs will do anything, but only for you.”

Increasing anxieties about terrorism and insurgencies have forced the Indian government to step up its response, and NTCD plays a pivotal role in its training programs.

The dogs and their handlers stay at a quarantine facility near NTCD for 15 days, during which they pair up and bond with each other. This is known as “marrying-up.” If they do not fit with the program — for reasons including diseases, aggressiveness, or incoherence in basic obedience — they are dismissed.

But once they’re in, the dogs are trained in basic commands and great emphasis is placed on building an inseparable bond between dog and handler.

One instructor typically works with five handlers and their dogs at a time, giving one-on-one attention to each of their personalities, flaws, and identifying core instinctive strengths. This is where the nature of training specialization is also decided — whether the dog will make a good search and rescue dog or an infantry dog based on temperament and smell detection abilities.

“The secret to success lies in strong bonds between dogs and handlers and in how the handler makes use of the dog as his weapon in the field of combat.”

I first met Gypsy and Modal at this training facility. At the time, she was a 16-month-old German shepherd and had already undergone eight of the nine-month tracker dog training.

“We’ve been together for the last 13 months. Gypsy was given to me when she was a three-month-old,” Modal said as Gypsy intently stared at him.

“I saw her running and playing like a pup at our Kolkata Dog Squad premises, and I fell in love with her. It was instant,” he said. “I went to my senior and requested that she be given to me. We’ve been together since.”

Describing her personality, Modal said “Gypsy is always eager to learn whatever I teach. She wants tasks and is always forthcoming to perform them.”

Balwant Singh, squad supervisor who trained Modal and Gypsy, said the dog “always wants to work. “There are many dogs who take their time, but the moment you call Gypsy’s name, she gets ready,” he said.

Modal had one complaint though. “On Sundays, we don’t have the training, and everyone gets a day off, but this irritates Gypsy. She doesn’t let me rest until I do a few exercises with her.”

In Kolkata, Modal and Gypsy are often attached to the Special Branch and Intelligence Unit’s security detail for VIPs such as the president of India and other high-profile visits.

Life at the center

Things begin at 5 a.m., with an intensive regime of feeding, grooming, exercise, and, of course, training. Each day, a jeep would pick me up from the BSF Officer’s accommodation where I was hosted, and I would find myself thrown into a frenetic crowd of about 20 German Shepherds, Doberman, and the less-threatening Labradors, all tightly packed in the back of a military truck. The dogs would bark and sniff and stare at me, a stranger amongst them.

One day, Jai, a young Doberman bursting with energy, suddenly charged at me. With nowhere to escape in a moving truck surrounded by highly trained dogs, I froze. On immediate instruction by Jai’s handler, I stretched out my hand. Jai smelled me and then paused. The next moment, the lean Doberman with a shiny black coat jumped at my face, licking me all over, making other handlers laugh. But I knew then that I had made a friend.

At a show arranged at NTCD to demonstrate the efficiency of the trained canines and handlers, an eight-year old gold medallist Labrador Basanti stood tall as the acknowledged star and focal point of everyone’s affection. The oldest canine member of this family, Basanti had solved many narcotics cases.

Mohan Mondal and Gypsy, with the Kolkata Police, work together in the field. 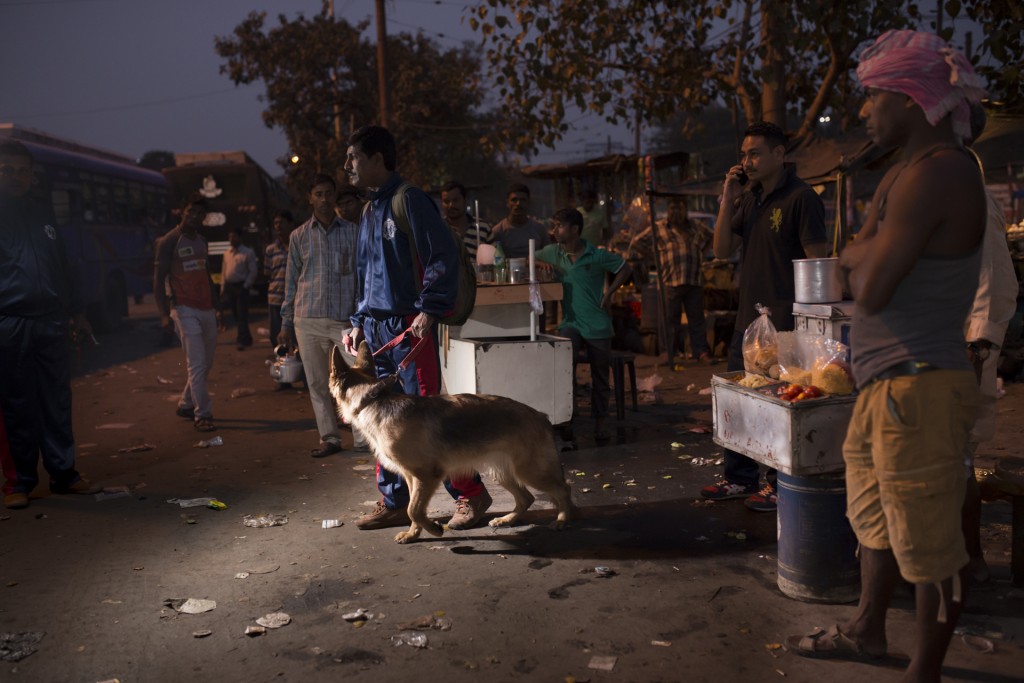 Pronoy Roy, a handler from Kolkata police who was undergoing training when I was there, is a life-long dog lover. His first dog was a Doberman named Sando, and after Sando’s death, he brought home a German Shepherd and named him Sando, too.

At the academy, Roy has been with his German Shepherd Penny since she was two months old. Penny is training to be a tracker and has completed seven months of the program.

Penny closely watches every move that Roy makes and refuses to let him out of sight even for a moment.

“Eye contact and bonding beyond words is very crucial,” Roy said. “Sometimes, we need to subdue someone on the streets who could get aggressive with us. With one glance we can instruct our dogs to act aggressively. Today, Penny and I share this relationship.”

He said Penny is the only one who can instantly figure out his moods.

“Penny wasn’t responding well to the training and six months down the line, she hadn’t learned much. I was upset and would break down during lonely nights in the barracks, but then I never pressured her. Instead, I said, ‘You take your time. I want to see how long you wait before you start responding,’ and today we both share an inseparable bond.”

The riverside in Kolkata is frequented by drug addicts and peddlers. Bimal Gurung and his German Shepherd Kate, the only narcotics dog in the squad, survey the area for possible narcotics movement. But they have to be careful; the government discourages active use of dogs in public places, even to sniff or subdue a mob.

P.K. Pandey, the assistant commissioner who is head of the Kolkata Police Dog Squad, discussed how even the selection of dog names are among the number of political considerations of which they have to be careful.

“We cannot give our dogs names that might have a religious significance, like Mary or Ganga, since the river is considered holy and worshiped in India,” he said. “People could raise objections. A few years back, there was a public protest because a local daily reported that one of our dogs had been named Ayesha.”

At the ground, Md. Kalimuddin, an assistant dog handler, reached out to the people sleeping and lazing around in the field to pick up a conversation in an effort to soothe their nerves before Kate and Bimal arrive. The driver from inside the vehicle, which is specially made to transport dogs, kept an eye out for trouble. 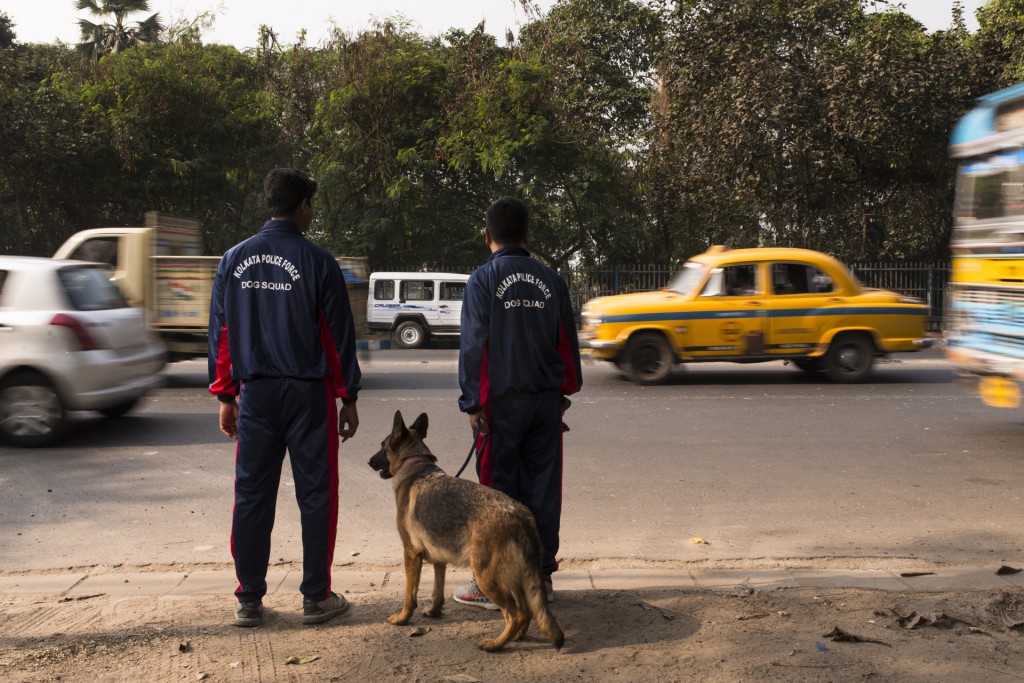 Hope you enjoyed reading about the life of dogs in training in the Indian Armed forces. With this note, let’s make sure to pay tribute to these wonderful souls and man’s best friend. Let’s salute these amazing service dogs of India!

You can find the original article here

How to Go to Vet School and Become a Veterinarian?