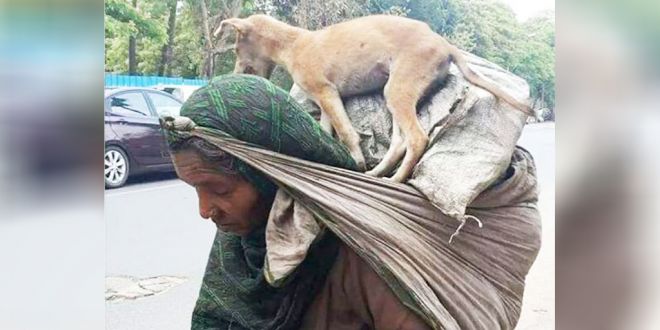 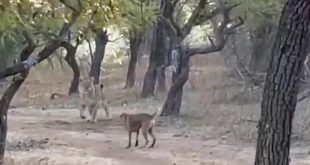 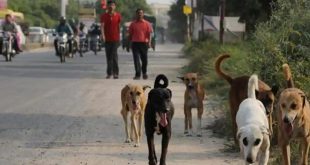 After walking on the road for two days, an exhausted Indian migrant worker was spotted carrying her pet dog on her shoulders, because it “gets tired very soon”. The photograph that surfaced on Twitter, on May 18, has gone viral with Indian tweeps praising the poor migrant workers for not letting hunger become a reason for abandoning her adopted stray pup.

Twitter user Fragrantwhirlwind tweeted: “Labourer walking home, says, ‘This one gets tired very soon. He lives with me….couldn’t have left him.’ [She] had been walking for two days.”

The pup is seen standing on a heavy cloth bag, hung at the migrant worker’s head. Tweeps said that the way some migrant workers have treated their pets with respect and love was an example of empathy that they should also be receiving from the government.

Tweep @myth_mythily replied: “When I thought the images can’t possibly make me tear up anymore! Such a kind, wonderful person. People have so much and they refuse to lift a finger to help them. She has little but sees no burden in carrying him.”

And @prernabindra added: “We, meanwhile, are standing by and watching this great suffering, save a few heroes.”

The name of the worker or the location is not known, but, saluting her for her compassion, @iid_sp tweeted: “Oh my God. I cannot control my tears. If only the leaders of this nation had one-hundredth of this lady’s compassion and commitment, we would have come through this crisis with a fighting chance.”

The pictures went viral especially at a time when animals are being eyed speculatively for zoonotic threats.

The photograph gained thousands of likes and retweets, with most people praising the old woman, for not letting hunger and poverty stop her from taking care of her pet.

“And, then we have people who abandon pets… #AdoptDontShop #Covid_19india #COVID19 #migrants,” tweeted @fabwrite.

When the novel coronavirus pandemic struck, there were reports from across the world that people had started abandoning their pets. They feared that animals constituted a risk vector for COVID-19. Soon after, the World Health Organisation issued a clarification on their website, stating that “there is no evidence that a dog, cat or any pet can transmit COVID-19”.

Sharing another similar story and praising poor workers for taking pets along, as they head back to their villages, @_swati_dwivedi tweeted: “A migrant family carrying their pet along… Please don’t abandon your pets… they are family and for them, we are their world.”

A migrant family carrying their pet along… Pl dont abandon your pets…they are family and for them we are their world. pic.twitter.com/T8V0Fjm0wX

In many parts of the world, the lockdown resulted in a rise in pet adoptions. Animal activists now worry that once people go back to work, these pets will be abandoned again.