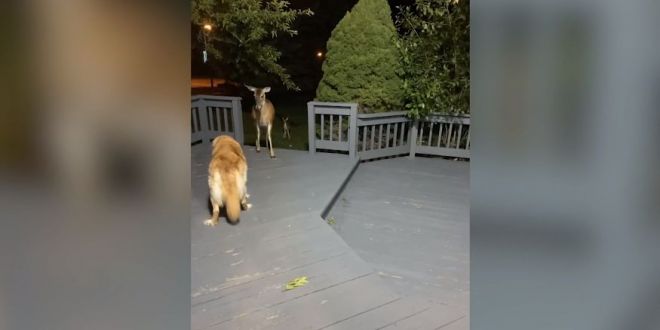 WESTLAKE, Ohio (WJW) — A Westlake woman is warning pet owners to be very careful after a deer attacked her dog right on their back deck.

Joan Ford says she was letting her 12-year-old Golden Retriever rescue named Gracie out to use the bathroom around 11 p.m. Tuesday when she saw the deer in her Sperrys Forge Trail yard.

At first it looked like Gracie was making a new friend and it seemed “so sweet,” Ford explained.

“So I grabbed my camera,” she added.

But just as she began recording video the deer lunged and began stomping Gracie.

“All the sudden the deer jumps up on the deck and attacks her,” said Ford. “I thought for sure her back was broken, she was just flat out.”

Gracie was shaken up, but luckily not seriously hurt.

Ford posted the experience online to warn others and learned of other similar deer attacks occurring on the west side.

FOX 8 also was alerted to an attack in South Russell. A man posted online that a deer charged onto their porch on Sun Ridge Lane and attacked his wife as she was letting their dog outside.

He said the deer “knocked her down and beat her with its hooves.”

EMS responded and it appears the woman is going to be okay, but wildlife experts say these cases are not that unusual this time of year because it’s “baby season”.

Barnett says deer are not predatory animals, but they are very protective of their fawns, and there was a fawn standing behind the deer that attacked Gracie.

A fawn could be in the yard even if a homeowner doesn’t see it, Barnett explained.

“Those little tiny spots, their camouflage is so good that you can open your back door, look in your backyard and maybe not even notice there’s a baby right there, and mom’s gonna want to protect that baby,” said Barnett.

To avoid any dangerous interactions, Barnett says residents should always look around their yard before going outside or letting the dog out. If you see a fawn you should not touch it or go near it.

She says it’s also common this time of year to see a fawn or baby bunnies that appear abandoned, but they aren’t and should also be left alone.

“We’re getting a lot of calls, that there’s this fawn that’s been laying in my yard for 3 days, I haven’t seen mom, but that’s actually pretty typical,” said Barnett. “Because mom is big, she’s easy for predators to see, so she’s not going to hang out with her baby.”

But she’s probably close by and absolutely will return; typically at sunrise and sunset.

So Barnett says people need to be extra cautious during those times of day, even if you have a fenced in yard.

“They’re really good at jumping. They can jump over a 6 foot fence if they want to,” said Barnett.

She says deterrent sprays and products are also not always effective because every deer is different and some don’t mind the scents.

If anyone has questions about wildlife or needs help with a situation Barnett says they can visit or call the Lake Erie Nature & Science Center at (440) 871-2900 ext.204. You can also check out their website for additional information.