All You Wanted To Know About The Indian Tibetan Mastiff – Bhutia

You may not know this, but every country in the world has a dog breed that happens to be associated with the same. For example, the Rottweilers and German Shepherds belong to Germany.

China is known for its Pugs, England for English Bulldogs, and France for the French Bulldogs. You may be wondering about the breed that India is known for.

Truth to be told, there is no breed as such. Everyone in India seems to be highly obsessed with international dog breeds. Such is the craze that we have forgotten about the dog breeds endemic to India.

Bhutia dogs are native to Nepal and India, the two neighboring countries on the world map. These dogs are also known as the Indian sheepdog.

They are well-known for their courage, determination to keep their herd protected, and also for their aggression. Apart from that, they are also supposed to be just as ferocious as leopards.

They are petted in villages to protect the cattle. There is not much information regarding the exact origin of the Bhutia breed since it has not been recorded appropriately.

However, in north India, they have a rich heritage. They are held in high esteem in Bhutan and Nepal too.

Many believe that this Himalayan breed has been there since ancient times.

In all the years they have existed on the face of the planet, these dogs have been used mainly for hunting, especially in the mountainous terrain that can be so harsh for predators not accustomed to such environments.

As of now, the Bhutia dogs are found mainly within the territories of India. It is said that Pandavas took Bhutia dogs with them when they carried out their expeditions in northern India. They were also supposed to be there at the time of Gautama Buddha.

Where can you find them?

The members of this particular dog breed can well be spotted in and around the meadows of the Kuari Pass. It is a region located in the state of Uttarakhand in India.

As has been said already, they are well-reputed for their herding and peer instinct. They can also be called the very epitome of a guard dog. They would also not think twice before risking their lives for their masters.

They are highly affectionate and friendly towards their owners. Hence, they make such great companions as well. Apart from Uttarakhand, you can also find them at the following locations:

In all these places, they are known by various names. For example, in Himachal Pradesh and Nepal, it is referred to as Bhote Kukkur and Bhutia Gaddi Leopardhund.

How strong and ferocious are these dogs? 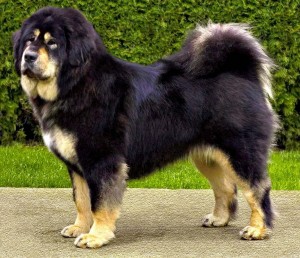 As has been said already, the breed is well known for its strength and ferocity. Bhutia dog breeds are strong dogs with great guarding instincts.

In the mountainous areas where these dogs inhabit, they guard the herds they are a part of. They are also excellent in their roles as shepherd dogs.

People in the mountainous areas have to face problems because of the number of leopards. However, you can be sure that when you have a pair of Bhutia dogs at home, they would be able to scare away such wild animals with ease.

All you need to do is put a collar that has sharp spikes around its neck. It will make sure that the wild animals do not attack their necks.

Their features and how to groom them

These dogs are usually found in solid colors such as dark fawn and a combination of black and tan.

At times, you would also find them in other colors such as reddish, shadow white, and black. On average, their height is between 26 and 32 inches.

On average, their weight is between 60 and 84 pounds. As far as herding dogs go, they are the best out there. They can walk a maximum of 20 to 25 km every day.

At the very least, they need to walk 5 km every day to get the requisite amount of exercise to keep themselves fit and healthy. As far as grooming goes, they need just as much care as the other dog breeds out there.

Attention is to be given to their furs because of how thick it is. You may be wondering about the best way you can raise them. Just like all other dog breeds in India, they have to be socialized when they are puppies.

If you want to pet them, you must teach them what behavior is acceptable and what is not. These are strong dogs, and for that, you have to be a strong leader.

In terms of personality, they can be rather stubborn, which means they are likely to follow their whims; if not taught otherwise. However, if you ignore these traits, they are one of the most helpful companions you would ever find.

They would willingly guard and protect you as long as you are together in life. The unfortunate thing with this breed is that it is close to extinction.

Its gene pool has significantly diluted over the years. There is also a lack of dedicated breeders and programs for breeding them.

Remember that these babies are not suited to survive in urban environments. They need plenty of free space to roam around. Hence, the best options are the outskirts of cities, houses with gardens, and holiday homes.

They do eat regular human food such as rice and curd. If you want to give them dog food, you should talk to a veterinary doctor before you do so. Training them can be quite a task. You can be sure that the results would be worth it.

How to Care for a German shepherd?