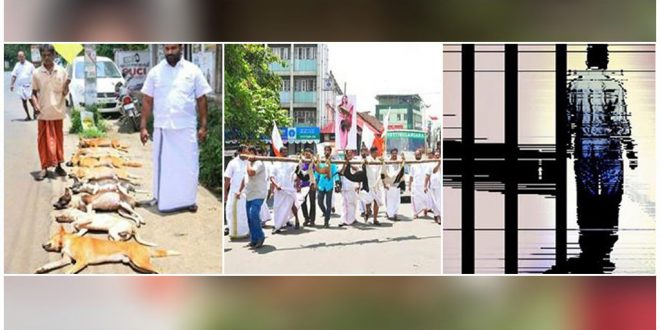 You must have read our recent news on how Youth Wing activists in Kerala who killed stray dogs and hung them upside down on a pole during a protest. These activists were arrested for this heinous act of killing on Wednesday. However, they were let off on bail later.

These activists were charged with cases under sections 429, 143, 147 and 149 of the IPC and Prevention of Cruelty on Animals Act 1960. They even showed their inhuman side by leaving the carcasses of the dogs in front of municipal corporation. The cops and the Municipal staff buried the carcasses later.

These carcasses were exhumed later for autopsy. They found out that the dogs were killed by being hit on the head. The Youth wing members killed around 10 dogs which were found roaming through the streets.

PETA India has sent a letter to Kerala Congress (M) Leader K M Mani regarding the killing of stray dogs by the youth wing of the Kerala Congress (M). The letter urged Mani to initiate strict police action and punishments permitted under the law, expel those who were involved in this killing from the youth wing, and require them to undergo psychiatric counselling and evaluation prior to re-joining. Humane Society International India’s managing director, N G Jayasimha and Member of the Animal Welfare Board of India has condemned the incident.

“It is disgraceful that Kerala politicos who are public representatives and are duty bound to safeguard the law of the state have resorted to unlawful killing of street dogs. Such inhuman killing at the hands of politicians will have terrible ramification over the entire state, “he said in a statement.

Meanwhile, Youth Front (M) state president Saji Manjakadambil said that the members of the youth wing will continue killing of stray dogs and will extend to other districts in the state as well, if government don’t take any immediate action against stray dogs.