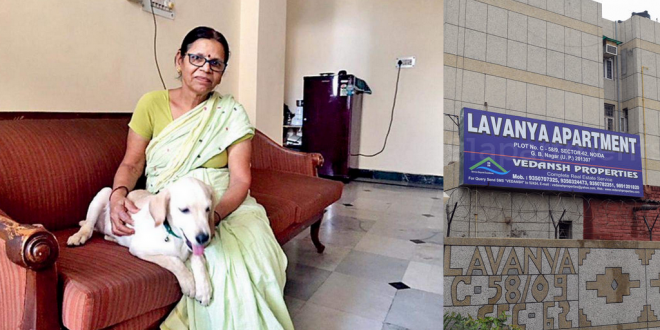 A sector 62 housing society (Lavanya Apartments) in Noida is forcing a couple to leave their rented accommodation as they have a gotten a pet dog. The society has disallowed pet dogs in the society.

Abhishek Kumar, who works at the Dialogue and Development Commission of Delhi, lives with his wife and mother-in-law. His wife, Deepshikha Agrawal works in an MNC in sector 65. The couple took a three-month-old Labrador named Tutu to their home to help keep company Deepshika’s mother, Neelam Agarwal. She recently lost her husband and had fallen to depression.

As the couple is working all day long, Tutu spends most of the time with Neelam and have gotten really close to her. Abhishek says that the dog’s presence is not even noticeable as he doesn’t bark much and is being house trained.

The things heated up when Tutu urinated on the stairway during his training and the sweeper working for the society refused to clean it. They had a small argument after which Abhishek received a call from the society supervisor asking them to let go of the dog as the society doesn’t allow pets. Abhishek tried to reason with the supervisor that the dog is a therapy animal for their mother-in-law as she stays alone at home all day. He also assured the supervisor that he is training the dog and he would ensure that it urinates outside the society or be fully house trained.

The matter was escalated in the weekly society meetings where most of the society members refused support and asked Abhishek to forego his pet dog. Soon, they were told by their landlord to vacate the flat within 15 days. As Abhishek was already planning to shift to a new flat in the same society, he asked for two months’ time. However, the new landlord also became uncomfortable and to avoid any issues with society members, he told Abhishek that he can’t allow the pet in his flat as well.

Kaveri Rana, president of the Gautam Budh Nagar, People for Animals (PFA), said that a society cannot issue such notice as it is against the Supreme Court guidelines.

“Keeping a pet is a democratic right of any individual and the Animal Welfare Board of India has been issuing notices to the Federation of RWAs in Noida on this issue from time to time. Disallowing a pet companionship is violation of a citizen’s basic right,” she said.

Abhishek and his family has decided to not forego their pet dog Tutu and is looking for a flat in a dog friendly society.

“Tutu is like a child to us. We don’t think we will be able to live without him,” His wife said.

Would you do the same thing for your dog? Share your thoughts with us in the comments below!