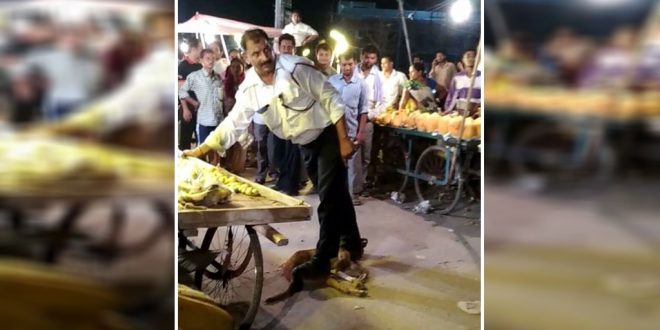 Drunk Noida Cop Chokes Dog To Death With His Foot

Another shocking incident of animal cruelty, a man from Noida Traffic Police was caught on camera, choking a stray dog to death with his feet. The incident took place at Som Bazaar in Noida Sector 45 between 9pm and 10 pm on Friday night.

The man was identified as a Cop in Noida Traffic police. 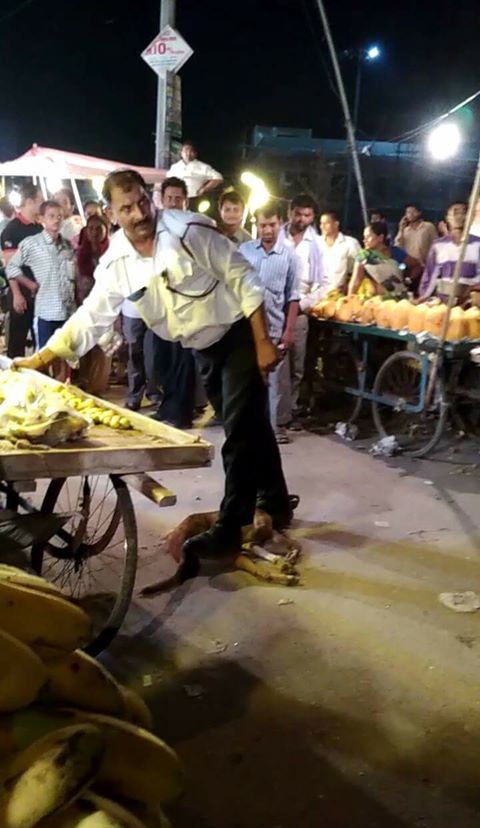 According to the 18-sec video clip shot by a passerby shows the man standing on the dog, pressing the dog’s mouth and neck onto the ground with one foot and holding its hind legs with another foot about an hour and moved after the dog breathed its last.

The eyewitness, said, “The man in question is an ex-army person and voluntarily worked as a traffic marshal along with Gautam Budh Nagar police in Noida.”

He said people who passed made several “appeals” to the man, but he did not get off the dog.

“He stood on the dog with his feet making the animal immovable. When people asked to leave the dog he quarreled with them and did not move. He was adamant to kill the animal, as it barked at him,” he said.

The People for Animals representative in Noida on Saturday have taken cognizance on the matter and approached the police to register a complaint in the matter under prevention of cruelty against animals.

Ashima Sunil, the president of the group in Ghaziabad, said,

“It is really a brutal act. I had spoken to station in-charge of Sector 39 police station and a case will be soon lodged against the errant person.”

Ajay Kumar Singh, the station house officer of Sector 39 police station, said, “We have been informed about such an incident by representatives of People for Animals. We shall establish the authenticity of the video and investigate into the matter further.”

Share your thoughts with us in  the comments below!