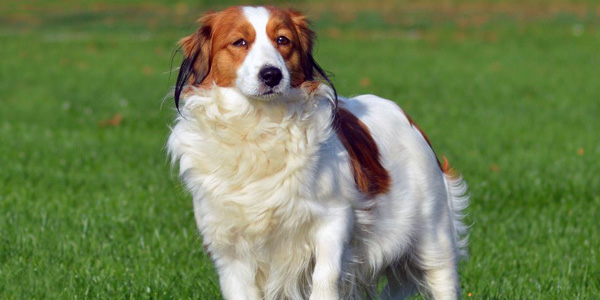 Origin of Name: Originating in the Netherlands, this cheerful spaniel appears in paintings dating back to the sixteenth century. He served as a hunting dog, luring ducks within range so they can be shot or tagged, much like the Nova Scotia Duck Tolling Retriever. In fact, the Kooiker is thought to be the ancestor of the Toller.

About Kooikerhondje
The Kooiker’s name comes from the Dutch words “kooi” (duck trap) and “hond” (dog). The hunter, or decoy person, is the “kooiker.” The “je” on the end of the name is a suffix meaning “small.” A Kooikerhondje, then, is the small dog belonging to the duck trapper. The Kooiker has a white coat with large reddish-orange patches. Friendly, good-natured, and alert, the Kooiker is an excellent family companion with watch dog skills as well as athletic ability that makes him a natural at games such as agility and flyball. As a retriever, he also loves playing fetch, especially in the water.

Kooikers have existed in Holland at least as far back as the sixteenth century, judging from the breed's memorable appearance in many Dutch paintings of the period. Kooikers were bred as duck decoys, used for trapping live waterfowl by attracting them with their bushy tails, leading them along the banks of a canal, and finally drawing them into a catching pen where they could be sold at the market.

Unfortunately, the Kooiker became much less useful as duck decoys became increasingly unpopular, and by 1939 only about twenty-five Kooikers were thought to still be in existence. Due to the efforts of eccentric dog breeder Baroness von Hardenbroek, the Kooiker made a spectacular reappearance, and the breed was formally recognized by the Dutch Kennel Club in 1966. The Kooiker remains rare in North America, but efforts are being made to popularize the breed.

Colour- 0range to deep chestnut , Red on a white background

Kooikerhondje are generally healthy, but like all breeds, they can be subject to certain health conditions. Not all Kooikerhondje will get any or all of these diseases, but it's important to be aware of them if you're considering this breed.

Temperament
The Kooikerhondje is a cheerful dog, loving equally at home as a hunting dog or a family companion. Kooikers insurance and outgoing with people who know a little concerned but with strange people and dogs. They do well with children who are raised with them. Because of their intelligence and sensitivity, Kooikers require the company but not the dominant style of training.

Training & Intelligence
Kooikerhondje are very intelligent but training will be difficult, which might not be suitable for a first time dog owner. Patience and perseverance are required to adequately train it. Professional obedience schools can also be helpful. Dogs, when training is to use your tone of voice effectively to discipline and reward for good behavior through play and exercise, giving the dog a needed burst of energy.

Complication in Breeding- No

Procreation
Kooikerhondje are generally healthy breed , living on average about 12 to 14 years. Generally a dog takes around 18 months to reach his or her full height and structure. It is advisable to breed your dogs after at least two years of age. If you are a first timer at breeding then taking a vets help.

Not easy to train
Intelligent breed 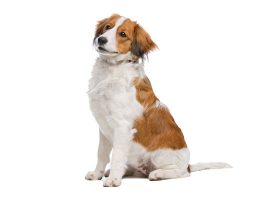 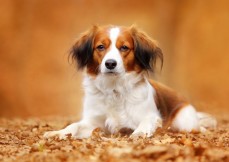 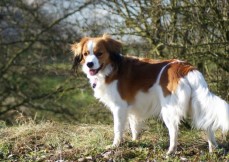 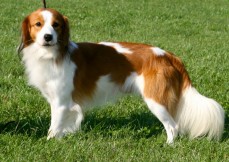 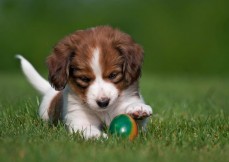