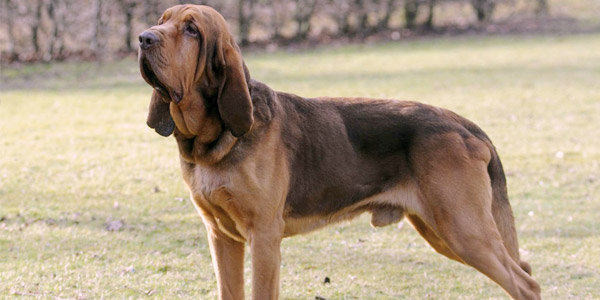 A group of dogs that hunt together by scent, known as Sagaces!

Origin of Name: The ancestry of the modern Bloodhound can be traced back to the monastery of St Huberts. These dogs were called 'Segusius' and were originally used to track wolves, big cats or deer, or to follow the trail of wounded game.

About bloodhound:
The Bloodhound is a giant purebred known for being affectionate, gentle, independent, and playful. The most common colors for Bloodhounds are black and tan and red. To keep it healthy, it will need to get exercise regularly.

Dogs that hunt by scent have been known for millennia. Reports of dogs that "discover and trace out the tracks of the animal" date as far back as the first century AD. It was in medieval Europe, however, that the dogs began to be developed into the scenthound we know today as the Bloodhound.

The first actual reference to the breed by that name was in a poem by Sir Humphrey de Bohun, Earl of Hereford, titled William of Palerne (1350). It depicts a dog, called a Bloodhound, as a careful hunter who is on the trail of two lovers disguised as bears.

From that poem, we can deduce that the name Bloodhound was a familiar word in the English language. The name comes from the dogs' status as an aristocratic breed kept by noblemen and abbots; in other words, it was a "blooded" hound.

Docile and well-mannered, the Bloodhound is not usually harmful toward humans, remaining calm at home. And while it makes for a great family pet.

Bloodhounds are generally healthy, but like all breeds, they're prone to certain health conditions. Not all Bloodhounds will get any or all of these diseases, but it's important to be aware of them if you're considering this breed.

Temperament
Bloodhound is extremely affectionate, neither quarrelsome with companions nor with other dogs. His nature is somewhat shy, and equally sensitive to kindness or correction by his master.Docile and well-mannered, the Bloodhound is not usually harmful toward humans, remaining calm at home. And while it makes for a great family pet, the Bloodhound may be shy around strangers.

Training & Intelligence
Bloodhound is intelligent but training will be difficult, which might not be suitable for a first time dog owner because of its playfulness, stubbornness, toughness and independence. Patience and perseverance are required to adequately train it. Professional obedience schools can also be helpful. The Bloodhound a tireless trailer and a loyal companion.

Procreation
bloodhound are extremely healthy and sturdy a breed and can be mated after it reaches a mature age of 1.5 years - 2 years. Before mating, it will be advisable to see the medical history of the mate to rule out any medical conditions that may be transferred genetically. 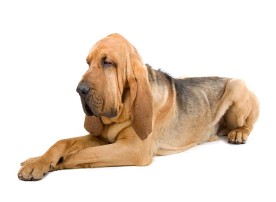 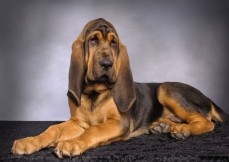 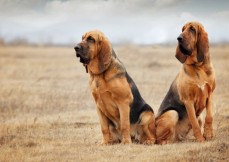 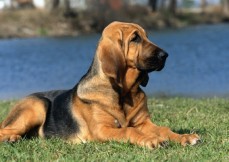 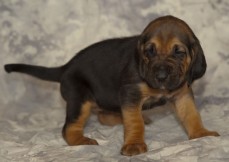