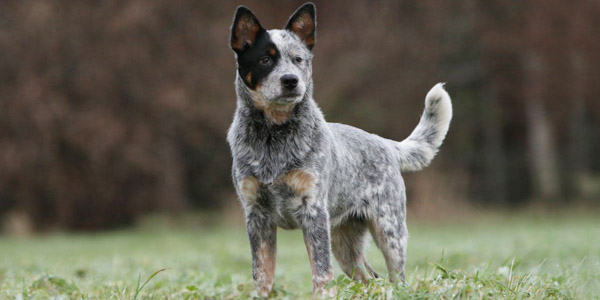 Origin of Name: The Australian Cattle Dog has also been known as the Australian Heeler, Hall's Heeler, Queensland Heeler and Blue Heeler. "Heeler" refers to its herding skill of snapping and biting cattle's heels. Its talents are retrieving, herding, guarding, agility, competitive obedience and performing tricks.

The Australian Cattle Dog, also known as the Australian Heeler, the Blue Heeler, the Queensland Heeler, the Red Heeler and the Hall’s Heeler, was developed in Australia to drive cattle quietly, calmly and patiently on the long trek to the sales market – a task at that time called being a “drover’s dog.”

The breed also can skillfully manage goats, horses, and even ducks and geese. The Cattle Dog is best known for its stamina, versatility and intense focus on whatever task is at hand. It is said to have only two speeds: extremely fast, and fast asleep. It also reportedly holds the record for the longest-living dog: 29 years. The Australian Cattle Dog was recognized by the American Kennel Club in 1980 as a member of its Working Group. The breed was transferred to the Herding Group in 1983.

The Australian Cattle Dog was bred by 19th-century Australian settlers to herd cattle on large ranches. This breed was instrumental in helping ranchers expand the Australian beef industry by quietly but aggressively herding the sometimes uncontrollable, almost wild cattle with nips and bites.

Australian Cattle Dogs are a strong, compact and solid dog. They give the impression of a dog that is tough, alert and agile. They have a strong head and broad face with upright ears. It is normal for dogs to have an initial cautious glint or look in the eye.

Temperament
The Australian Cattle Dog is best described as intelligent, energetic and fiercely loyal. The Australian Cattle Dog is good family dog, but he does best with children if he's raised with them and accepts them early on as members of his household. In such cases, he's very playful and protective. Australian Cattle Dogs will bite a stranger and some are quite unstable, biting people They are usually loyal to one or two people. A good breeder will produce dogs specifically for their temperament with breed standards an important, but secondary, consideration.

Training & Intelligence
Australian Cattle Dogs are very strong willed and like to test boundaries. It is recommended that Australian Cattle Dogs receive training from an early age and, if they are to be a family dog, they should be immediately introduced to family members and allowed to mix with other people as soon as possible. Upbringing is very important to the breed and they need to know who is boss straight away. These dogs can be trained to do almost any kind of task and relish the opportunity to please.

Procreation
Australian Cattle are extremely healthy and sturdy a breed and can be mated after it reaches a mature age of 1.5 years - 2 years. Before mating, it will be advisable to see the medical history of the mate to rule out any medical conditions that may be transferred genetically. If you are a first time pet parent, you might want to seek medical help from a veterinarian for the neonatal care and care post the delivery of the pups. 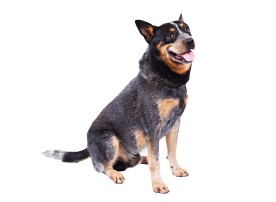 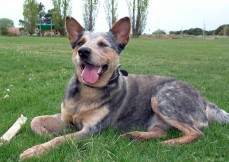 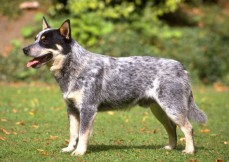