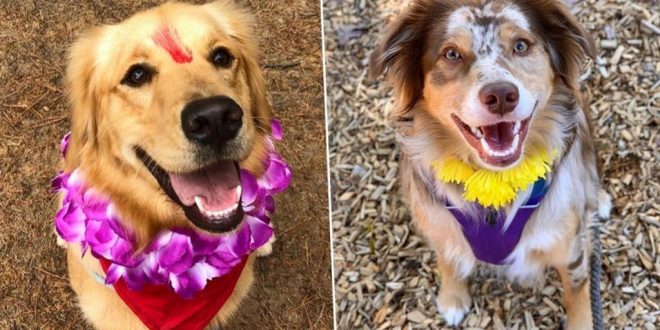 Nepal Celebrates “KUKUR TIHAR” | The Day Of The Dogs Festival

Every year, we keep educating people about the harmful effects of Diwali fireworks on pets and street dogs in India. However, every year things don’t change much. Another Diwali was celebrated with noise rather than lights. There have been many reports of animal cruelty as well. But Nepal has great respect for these creatures.  Every year, they celebrate this 5-day festival called Tihar, in which the second day of the festival is all about celebrating dogs. Traditionally known as Kukur Tihar, which means the day of the dogs. India could definitely learn a few things from the neighbors.

People in Nepal, on the second day of the festival, worship the dogs, street pups and pets. During this festival, the dogs across the country are worshipped and adorned with flowers. Red tikka is put on the dogs’ foreheads as part of the ceremony and they are offered food.

The old mythological belief in the Nepalese customs says that the dogs are the messengers of the god of death (Yam) and the ceremony is done to appease the god.

Check out some celebration posts:

Whether or not U believe in #Dogs, this little #Nepalese tradition will restore some of yr faith in humanity. Each year, on 2nd day of 5-day Diwali celebrations in Nepal, they celebrates #KukurTihar or “day of dogs” by worshipping man’s four-legged friend https://t.co/H9Kh8DOltB

Kukur Tihar is tommorow. The day we worship all dogs. Give blessings to your dogs. pic.twitter.com/3P5dElE79X

Kayle, bcause calling him ‘kaley’ could be racist!? He’s the grandson of kuchu & still lives with us. Has his bih living with us too, Sweety. She might be due in few months. His mom aka Kuchu’s daughter ‘Motie’ went poila after giving birth to Kayle…. he balls nmw.#kukurtihar pic.twitter.com/Aju3A3JEQq