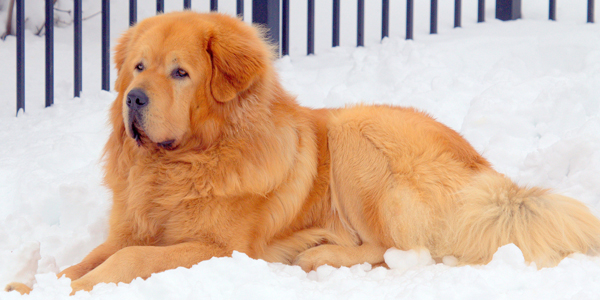 Origin of Name: The name ‘Tibetan Mastiff’ is a misnomer; this breed is actually not a mastiff in the true sense. However, since ‘mastiff’ means ‘big dog’, the nomenclature fits in a literal sense. This breed is also known as ‘Dok-Khyi’ in Tibet, which means ‘nomad dog’. In Nepal, these dogs are called ‘Bhote Kukur’, or ‘Tibetan dog’.

Getting a tibetan mastiff puppies home-Expensive

About Tibetan Mastiff:
Bred centuries ago in Tibet to be guardian dogs for livestock and property, the Tibetan Mastiff continues to perform this role, but is now also a happy family dog. This is a massive breed of dog and, however, little the puppy, remember that they grow into a mammoth 65kgs in most cases. With their luxurious mane of hair, muscular bodies and show-stopping presence, American Tibetan Mastiffs are known to be amongst the most expensive dogs to maintain. Naturally, this leads them to become status symbols, not just in the land of their birth, but the world over. The aspirational value apart, remember that this beautiful beast comes with several disclaimers. However, if you’re a responsible pet parent and are willing to put in a lot of research before acquiring this stunning new family member and plenty of hard work in terms of socialisation and training after, be prepared for a lifetime of adventures with the Tibetan Mastiff!

While no existing records can pinpoint the exact year of origin of the Tibetan Mastiff, it’s safe to say that this is one of the oldest breeds in the world. DNA evidence suggests that mastiff-type dogs have existed in Tibet for about 5,000 years. The Do-Khyi was a smaller type of mastiff that travelled with nomads and served the purpose of guardian dogs to the livestock, while the Tsang-Khyi – a larger type of mastiff – served as guardians to Tibetan Buddhist monks. In written records, Captain Samuel Turner wrote of his time in Tibet and mentions a large breed of dog. The first Tibetan Mastiff made its way to England, when Queen Victoria received one as a gift from Lord Harding, the then Viceroy of India. The breed officially made it to England's Kennel Club records as a Tibetan Mastiff, in 1873.

Tibetan Mastiffs can be calm indoors dogs, but tend to get active in the mornings and evenings. Create a schedule for them that will keep them occupied during these times of day and, chances are, you’ll have a happy, well-adjusted dog. They are companion dogs and do not do well when left alone, especially outdoors, for several hours. This breed has a particularly protective nature and should never be walked off leash, when in public. It is also advised that their walk route be changed regularly to keep it interesting and keep them from getting possessive about “their” route. It’s for the same reason that they are not recommended as pets for either first time dog families or families with very little children. Tibetan Mastiffs are extremely intelligent, even stubborn, dogs. They are known to be very sensitive to human moods, and get upset if their human companions are unhappy. Because of their possessive nature, early socialization with several people and animals comes highly recommended for these dogs.

Tibetan Mastiffs are prone to some hereditary health problems and problems, most notable amongst them, hip dysplasia, a condition in which the thigh bone does not fit properly into the hip joint. While this is a hereditary problem, external causes like overfeeding and not exercising the dog regularly can worsen the problem over time. Similarly, elbow dysplasia, which occurs because of differing growth rates of the three bones that make up a dog’s elbow, is also common in this breed. It can cause painful lameness, but can often be corrected with surgery. Tibetan Mastiffs are also prone to Canine Inherited Demyelinate Neuropathy. This is an inherited condition found to occur in puppies less than 6 weeks old. The condition affects their nervous system and causes weakness in the hind legs, that eventually progresses to paralysis. Puppies with CIDN usually do not live beyond four months of age and there is no treatment for this condition. The breed can also suffer from Panosteitis or canine growing pains. It is an inflammation of the long bones that affects young, large-breed dogs and causes lameness, which often shifts from leg to leg. The condition usually lasts from one to six months and eventually resolves with maturity, as the dog becomes an adult. The condition can easily be managed with painkillers prescribed by a practicing vet.

Temperament
The Tibetan Mastiff is a fearless, loyal and courageous dog. They might not show their affection all the time, but rest assured that they will go to any lengths to protect their family. There were bred to be the guardians of the flock especially against invaders such as wolves, leopards and other animals, and they retain this streak even today. They are fun with children and love to spend time with them but you have to remember that their size can become a hindrance with very small children as they can topple them with a wag of that massive tail. Being possessive dogs, Tibetan Mastiffs may also not quite understand children when they are at play or squealing excitedly. They can easily misinterpret these sounds and sights to be hostile and get on their job of “protecting”. Tibetan Mastiffs can be wary of strangers so you have to remember to socialize them early. This large breed dog is not for everyone and they are best suited to live with people who have plenty of experience with dogs.

Tibetan Mastiffs are definitely not for the first-time owners, it will take an experienced owner to ensure that this escape artist does not turn to destructive behaviour, which is mostly caused by boredom and anxiety. This breed suffers from nocturnal barking, and is not a breed that will thrive in hot and humid conditions, since they were bred to live in the cold Tibetan the mountains. They do best in cold climates and if you are bent on keeping them in a warmer environment then get ready to rake up high electricity bills with the air conditioning running all day long.

Training & Intelligence
The Tibetan Mastiff needs an experienced trainer who has immense patience and a gentle yet firm demeanour. This breed is harder to train when compared to others. They are headstrong and are a little slow to learn, so being extra patient with this breed whilst training, is a good idea. If you want a well-adjusted Tibetan Mastiff who gets along well with several people and other animals too, begin the socialization process as early as you can. These dogs have a strong sense of guarding their own flock, so the more people and animals that come into their “flock” early, the better! Unlike several other breeds, Tibetan Mastiffs take a long time to mature. It takes them as much as five years to mature and behave like adult dogs, so be prepared for a rather big baby for several years! In terms of training methodology, as in the case of most dogs, positive reinforcement methods using verbal encouragement and treats are the best way to a well-behaved and well-adjusted Tibetan Mastiff.

Procreation
The Tibetan Mastiff though not commonly seen is not difficult to breed. A female Mastiff comes on heat only once a year as opposed to other breeds who come on heat twice a year. Average male and female Tibetan Mastiffs attain sexual maturity anywhere between six to nine months of age, although they are still too young to breed at this age. This breed takes around 18 months to reach their full height and structure. It is advisable to breed your dog after at least two years of age. If you are first-timer at breeding, then taking a vet’s opinion is advisable. An average litter size is 6-8 puppies. 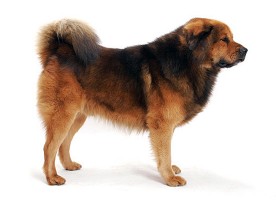 Not easy to groom
equires a lot of grooming 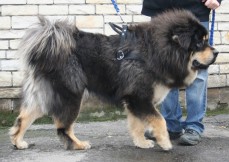 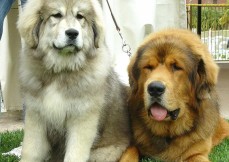