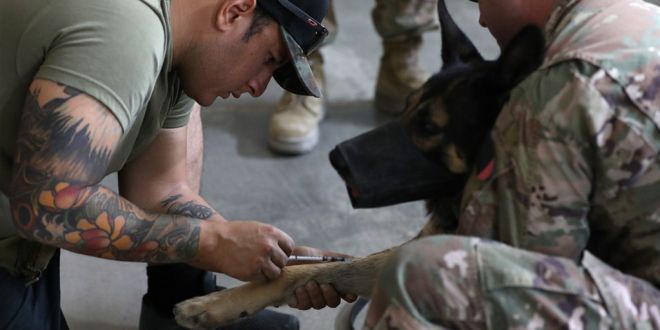 The U.S. Army said military dogs can only receive certain blood types, so having a blood bank ready can help treat K-9s quickly and efficiently.

In a tweet posted last week, the Department of Defense’s joint task force explained that the new blood bank allows for the rapid treatment of military dogs that are injured.

The mission of Operation Inherent Resolve is to defeat “ISIS in designated areas of Iraq and Syria and sets conditions for follow-on operations to increase regional stability,” according to its website. In a report from the joint task force in 2019, it said its military dogs work side-by-side with their handlers to help search cars and identify improvised explosive devices throughout Iraq and Syria.

The dogs help service members identify the presence of “explosives designed to cause disruption to operations,” the report said.

The U.S. Army said military dogs are like humans and can only receive certain blood types, so having a blood bank ready helps treat K-9s efficiently.

The canine blood bank was started after the Army Medical Command surgeon general’s office required the military’s veterinarians to record blood types for all working dogs, Army Col. Wayne Marotto told the military newspaper Stars and Stripes. He said personnel has set up the response capabilities to make sure animals also receive “the highest level of emergency care.”

The military has relied on “walking blood banks” for human casualties in Iraq and Afghanistan, where prescreened donors can be called up if there’s an immediate need for blood in remote or deployed environments.

U.S military working dog handlers in Iraq recently started a mobile blood bank for working dogs. The bank will allow for rapid treatment of injured working dogs. K9s🐶and their handlers provide security support to Coalition forces and our partners in the mission to #DefeatDaesh pic.twitter.com/4thaprs3u5

The canine-version of this would be used for dogs like Conan, a Belgian Malinois, that played a role in the raid that killed Islamic State leader Abu Bakr al-Baghdadi. He was injured when he was exposed to electric wires in the October 2019 raid. Conan has since recovered and received an award from President Donald Trump.

VIDEO: @CJTFOIR doggos are highly trained, working w/ troops in Iraq & Syria against ISIS. Their noses, ears, and eyes detect threats; their barks and bites secure them! 🐶Cute to look at, but a force to be reckoned with! Woof! @dog_rates @MWD_News #K9 pic.twitter.com/xh06E4MULk

In June 2020, an Air Force working dog Cvoky was rushed to Camp Arifjan, Kuwait, with a heat-related injury, according to the U.S. Army. The 120-pound Belgian Malinois needed a blood transfusion as a treatment for his injuries, and luckily it was available when they arrived at the camp.