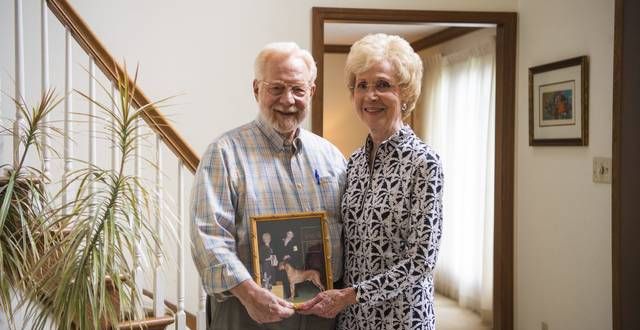 A Unity woman is getting a promotion of sorts this weekend at the Westminster Kennel Club Dog Show.

June A. Penta will judge the Toy Group on Saturday after three previous stints of examining specific breeds only at the prestigious show. Her time commanding the ring will be quick — judges have less than 3 minutes to look over each canine — but a lifetime of practice will make it seem like a breeze.

“In the ring, you’re concentrating because you don’t have a lot of time on each dog,” she said. “Especially when they’re on the table, you’re zoning in on all the parts.”

The 145th Annual Westminster Kennel Club Dog Show Presented by Purina Pro Plan will be held this weekend at an outdoor venue in Tarrytown, N.Y. The show was moved from its original winter date at Madison Square Garden in New York City because of the coronavirus pandemic.

Penta, 80, has been an American Kennel Club dog show judge since 1975. She bred and showed Afghan hounds and shih tzus in the years prior. She is approved to judge hound, toy and herding breeds, which amounts to about 100 varieties of dog.

She and her husband Jerry Penta, 81, who is also a judge, at one time participated in about 50 shows annually. They were looking forward to the opportunity this weekend after June Penta received a fancy envelope with the invitation months ago.

The best of each toy breed at the show will come to her to decide which dog in the group most closely matches the breed standard. That will include breeds such as the Chihuahua, Pomeranian, pug and Italian greyhound.

Penta knows much of the breed standards off by heart from her decades of experience, but it’s always important to review the information about the finer points.

“When you study them in depth and you know all about them, you really appreciate the breeds,” she said.

After the hard work Saturday, the Pentas will relax and watch the remainder of the show Sunday. The event will have a new look this year, set up in tents rather than at Madison Square Garden.

“This will be totally different,” Jerry Penta said.

The couple has traveled all over the world judging dogs. Both said the work is a challenge and satisfying, one that plays into their shared artistic backgrounds.

They may find some time to celebrate their wedding anniversary, too, at the most fitting place. The Pentas met at a dog show in Greensburg and were married June 11, 1977.

Judging of the Toy Group will be broadcast Saturday night on FS1, and stream on FOX Sports and FOX Now apps, starting at 7:30 p.m. The Best in Show winner will be announced Sunday night on FOX. Details about the weekend’s schedule of events — which include agility, obedience and junior showmanship competitions — and television coverage are available at westminsterkennelclub.org.