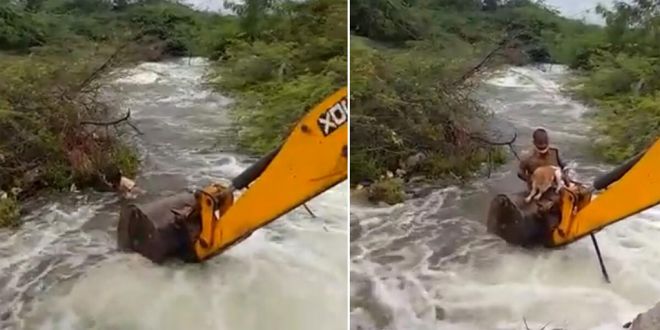 A home guard is being hailed as a hero after he risked his own life to save a dog that was stuck in the bushes along an overflowing stream in Telangana’s Nagarkurnool. A video that has gone viral shows Mujeeb from the Nagarkurnool police station stepping into the flowing stream to save the palpably frightened dog.

In the 2.25-minute video, the guard can be seen holding onto a JCB excavator, using it as a makeshift bridge, while attempting to reach the dog. Using a tree branch, Mujeeb tries to stabilise himself in the fast flowing river stream while trying to get to the dog stuck on the other end.

#WATCH Telangana Home Guard jawan, Mujeed rescues a dog stuck in thick bushes at the bank of an overflowing stream in Nagarkurnool (16.09.20) pic.twitter.com/Se6V7VE1AC

Eventually, he is able to grab on to the canine and safely brings it to the other side amid cheers from the nearby gathering. According to locals, the canine slipped and fell into one of the streams located on the outskirts of Nagarkurnool.

Since being shared online, the video has prompted several reactions among netizens, with many hailing the guard for his bravery.