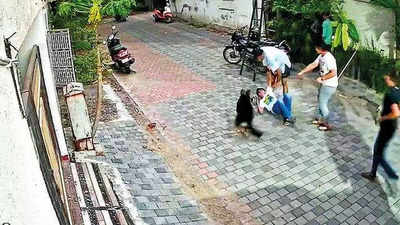 Surat Boy Thrashed For Taking Pet Dog For A Walk

When a young boy went for a walk with his pet dog, he was allegedly beaten up by a man from a nearby society.

The man named Virsinh Sarvaiya was arrested in Aryaman Society after his mother filed a formal complaint accusing him of abusing the youngster. Sarvaiya was eventually freed. After a video of Sarvaiya holding the youngster by the collar and striking him became viral, the situation was brought to light.

“Sarvaiya’s mother suffers from a dog allergy, and he has already mentioned it to the boy who walks the canine. He also told the boy that the canine makes the environment dirty.  And when he tried to explain himself to the youngster, it resulted in a disagreement between them, after which the accused hit the boy,” a police officer at Umra police station stated.

An investigation is on the way.