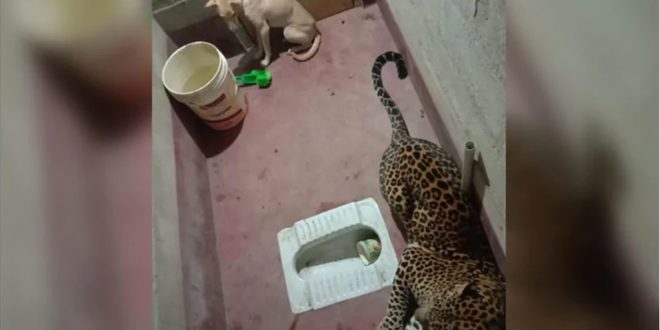 Stray Dog Trapped Inside Toilet with Leopard in Karnataka Village. What happened Next

It was nothing short of a terrifying moment for a stray dog as it found itself locked inside a toilet with a leopard for over seven hours in Karnataka’s Bilinele village on Wednesday. It all began after the leopard chased the dog and both entered the toilet.

Meanwhile, a local resident noticed it and locked the leopard as well as the dog inside the toilet and alerted the police and forest officials.

The resident saw the tail of the leopard and panicked, and bolted the toilet door from outside. The photo of the trapped animals inside the toilet shows the dog in one corner and the leopard in the other. By 9 am, the news spread across villages and people started to gather around the house.

The picture was taken through a gap in the toilet’s window from outside.

How Were the Animals Rescued?

Through a small hole on top of the house, a photo was clicked and videos were taken by the forest department.

Forest officers had brought in tranquilizer darts to sedate the animal and move it back to the forest. However, the leopard broke through the roof and nets and managed to escape.

The News Minute shared a video of the leopard as well.

This photo was taken from outside through a gap in the window. It is a leopard and a dog stuck together since this morning inside the toilet of a house in Kadaba, Dakshina Kannada district. I am told the leopard escaped at 2 pm and the dog is alive! pic.twitter.com/hgjJhaXW03

The dog was absolutely fine and was rescued from inside the toilet safely, The News Minute reports.

A video of the survivor! pic.twitter.com/ya9AqvrQRB

Locals gathered at the spot to witness the incident.