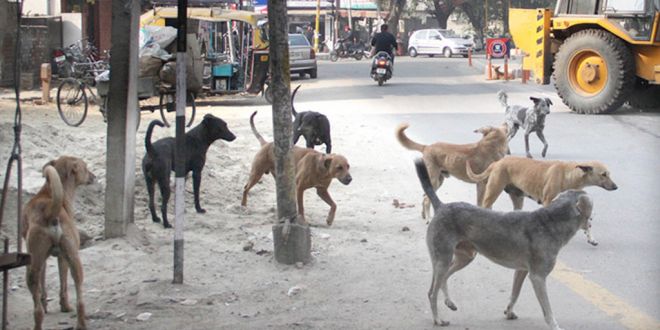 New Delhi, May 26 The in-fighting among the residents of housing societies overfeeding of stray dogs is nowhere near ending, with yet another attack on a pregnant Russian woman again in the national capital region this time in Noida.

The Russian woman residing in a condominium in Noida”s Sector 71 was allegedly attacked by two men for feeding foundling canines inside the complex.

“We have initiated an inquiry and a case has been registered against the men for voluntarily causing hurt and criminal intimidation,” Amit Kumar Singh, Station House Officer of Phase 3 police station told IANS.

The police said that the victim is married to an Indian man and they live in that society.

The issue was raked up on social media by one of the residents of the society. Her post had even solicited a response and help from the Noida Police Commissioner.

Kaveri Rana Bharadwaj wrote, “Mob led by Vikas Sharma, and Mr. Chauhan beat up a pregnant woman in Jagriti Apartment, Sector 71 Noida. Request you to immediately arrest these men and provide security to the scared woman!”

When contacted, a member of the Resident Welfare Association (RWA) of the society said that the allegations levied by her are false and that he, along with a handful of other people, had only asked her not to feed the dogs.

Vikas Sharma divulged, “The woman was called at the society gate by the members of the RWA. When she was asked not to feed the street dogs, she became aggressive, started fighting with the residents of the society, and even pushed a 70-year-old woman. The complaint that she registered against us is false. We did not even touch her.”

He added that there are 70-80 street dogs in the society who have lately become extremely aggressive. “The lady was asked not to feed them as people feared to step out of their houses and getting bitten.”

In another incident on Tuesday, a Greater Noida man beat up a Chinese woman for allegedly fostering a stray dog which bit his canine.

Greater Noida District Commissioner of Police Rajesh Kumar Singh told IANS that the man named Amar Pratap Singh of ATS Paradiso misbehaved with the woman after his dog was bitten by another dog who she used to feed every day.

The incident happened in the wee hours of the day when the accused took his dog out for a walk. “After his dog was bitten, in a fit of rage, he misbehaved with the Chinese woman.” A Non-Cognizable Report (NCR) has been registered and no arrests have been made so far, the police said.