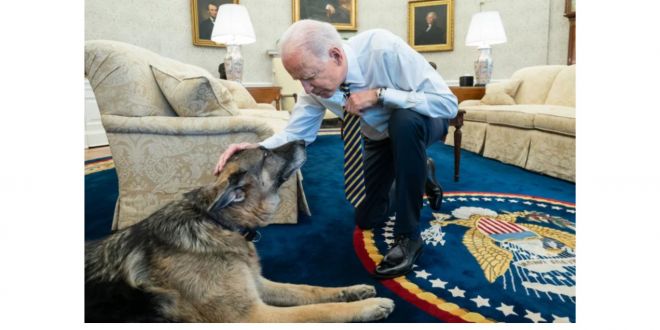 Champ Biden, one of two German shepherds belonging to President Biden and his family has died, the president and first lady Jill Biden announced late Saturday morning. He was 13 years old.

“Our hearts are heavy today,” Biden and first lady Jill Biden wrote in a statement, adding that the dog had died at their home.

The Bidens were at their home in Delaware.

“Even as Champ’s strength waned in his last months, when we came into a room, he would immediately pull himself up, his tail always wagging, and nuzzle us for an ear scratch or a belly rub,” the statement said. “Wherever we were, he wanted to be, and everything was instantly better when he was next to us.”

Champ Biden supervises while then-Vice President Joe Biden delivers a speech at the Naval Observatory in 2012.

Champ was a puppy during Biden’s tenure as vice president under the Obama administration. The same statement commemorated the dog’s love for chasing golf balls at the Naval Observatory and spending time with the Biden grandchildren.

The Bidens adopted their second dog, Major, in 2018, when he was 3 years old. Compared with Champ, Major reportedly had a harder time adjusting to life in the White House, where he was involved in two incidents.

“You turn a corner, and there’s two people you don’t know at all,” Biden told ABC’s Good Morning America after the first incident. “And he moves to protect. But he’s a sweet dog. Eighty-five percent of the people there love him. He just — all he does is lick them and wag his tail.”

Jill Biden defended Major following the second incident as well. “He is such a sweet lovable dog, he really is,” she told NBC’s Today. Major has since received additional training.

Major and Champ were repeatedly photographed as a pair. For Christmas, Jill Biden released a video of the two dogs, highlighting their different personalities: a stoic and subdued Champ, accompanied by an energetic and playful Major.

“In our most joyful moments and in our most grief-stricken days, he was there with us, sensitive to our every unspoken feeling and emotion,” the statement said. “We love our sweet, good boy and will miss him always.”