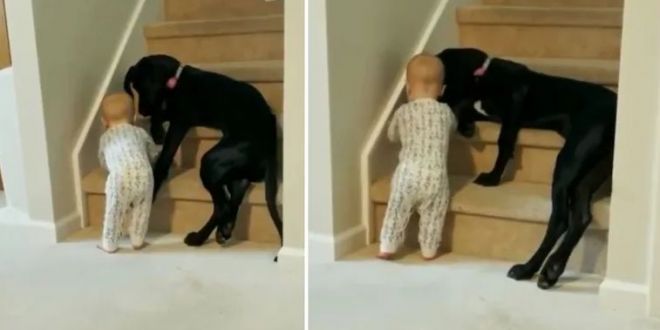 There is no doubt about the fact that dog videos can just change your mood and make you smile, even if that is for a second, amid gloom as such. Twitter user Danny Deraney posted a video of a pet dog stopping a toddler from climbing stairs so as to prevent an accident, and it has quite obviously, gone viral on social media.

It so happened that the child was trying to climb a flight of stairs. The pet dog, on the other hand, sat on the first step and stopped the toddler every time he made an attempt to climb the stairs. Tired, after several attempts, the toddler turned around and started crawling towards the other side, away from the stairs.

Guess what the dog did? He immediately got up from the stairs and followed the child to protect him.

The video has been viewed over 7,000 times so far and collected several likes as well. In the comments section, social media users shared their thoughts and opinions.

“The intelligence of doggos will never cease to amaze me. How they know the baby will try to climb the stairs and potentially hurt themselves and prevent that is just incredible,” a user said.

Another comment reads, “An amazing example of the evolution of the relationship between our species! Really, think about it.”