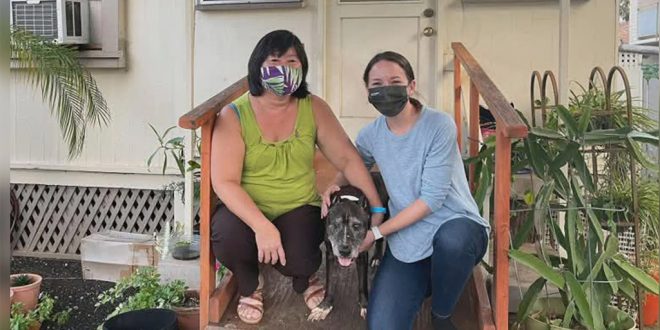 Dog Returns to her Family After a 12-Year Journey 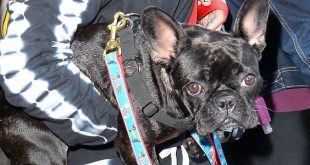 Twelve years ago, the Smith family of Honolulu had a one-eyed, black and white pit bull named Zoe that meant everything to their family.

“She used to sleep by me at night,” said Ashley Smith, who was just a teenager when Zoe was a puppy.

“She used to push Ashley off the bed,” said Sherrie Smith, Ashley’s mom.

Zoe looked intimidating when she was young, according to the Smiths. Her personality was the complete opposite, however.

“She loved any dog, any person, any other kind of animals, you know cats, dogs, and she’s just so tame and gentle,” Sherrie said about Zoe’s loving demeanor.

Sherrie Smith had to move in 2009. She searched hard for a place that would accept dogs but unfortunately, nowhere affordable would allow her to keep Zoe.

“To find a decent place, and a place that would take animals, that was the problem,” Sherrie explained.

Re-homing their beloved pet was one of the hardest decisions Sherrie has had to make.

The Smiths gave Zoe to a good family, but they never stayed in touch.

“Over the years, we’ve always talked about her and we’ve always wondered what happened to her,” Sherrie Smith said.

Ashley and Sherrie wondered about Zoe for over a decade until two weeks ago when Sherrie got an unexpected phone call.

“I was working and suddenly my phone rang and it said Humane Society and right away, I just had this feeling that it was about Zoe,” Sherrie said about the moment that would change her life.

The Hawaiian Humane Society said Zoe’s microchip was still registered to the Smiths.

“That is the only contact information that we’re provided if the pet doesn’t have a collar with a phone number or a name. It’s the only connection that we have to whoever was caring for that animal. So it’s really important that you keep that information updated,” said Jessica Tronoski with the Hawaiian Humane Society.

Ashley and Sherrie came immediately to pick Zoe up, of course. When asked if Zoe recognized them, Ashley said she did not think so.

“That kind of made us more sad because … we love her. But that’s why we want to find whoever [was caring for her] because that way she can have someone familiar,” Ashley Smith said, tearfully.

So Ashley posted on Facebook searching for whoever was caring for Zoe. The post was shared in a number of Hawaii lost pet groups.

The Smiths ultimately got some answers about Zoe’s past – it was not the happy ending they were hoping for.

“The same situation happened to them. They had to move and a lot of places wouldn’t accept pit bulls, so they had to re-home her,” Ashley said about Zoe’s second owners whom she found through her social media post.

Ashley learned that Zoe was re-homed a number of times over the last 12 years, and they realized after several days of searching that no one was looking for her.

The Smiths were also concerned that they would not be able to keep Zoe permanently again. Their place is not pet friendly, after all.

An exception was made thanks to Sherrie Smith’s landlord.

“I just want to thank her for everything she’s done for me,” Sherrie said about her landlord for allowing them to keep Zoe.

Zoe is now 14 years old and the Smiths promise to give her the love she deserves for whatever time she has left.

“It’s like a full circle. She came back to us,” Sherrie Smith said.