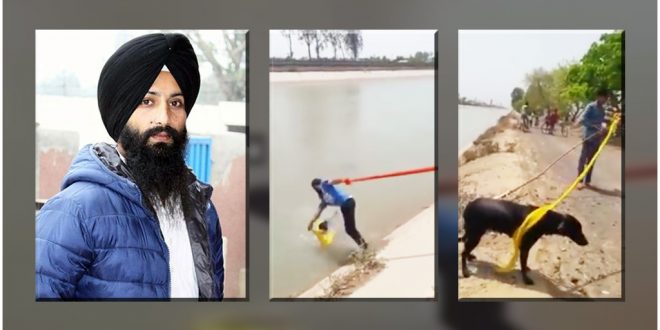 A Brave Sikh Uses His Turban To Save A Drowning Dog

A brave Sikh removed his turban to save a drowning dog & proved that there is still a lot of good left in our world.

In a recent incident, a 28-year-old Sarwan Singh set aside his religious compulsion and saved a dog from drowning in a canal. The Sikh man removed his turban and used it in order to rescue a drowning dog. The video of the incident has gone viral on social media.

While the people acted as mute spectators when the dog was drowning, the brave Sikh did not waste any time and took off his turban to rescue the dog.

Sarwan Singh was driving past an irrigation canal in Punjab when he spotted a group of onlookers looking at the stricken dog who was drowning. Sarwan Singh did not know how to swim, but without even thinking about his religious compulsions, he took off his turban and rescued the drowning dog.

“The moment I started taking off my turban, people watching around were shocked. They thought I was disrespecting my faith. But what was important at that point was to save the animal’s life,” said Sarwan Singh.

Wearing a turban is one of the five articles of faith in Sikhism. It is a doctrine of Sikhism that one can only remove his turban at home or while bathing.

Share your thoughts on this story in the comments below!