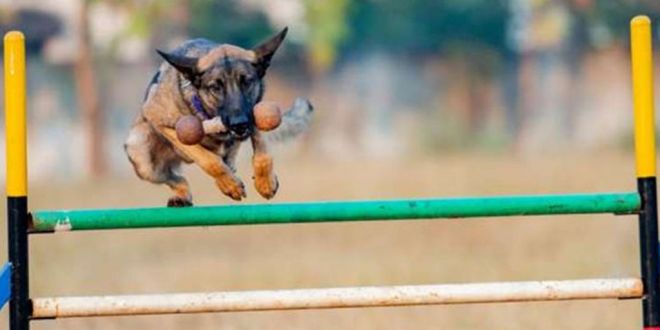 When two expensive silver trays went missing from a royal palace in the Indian state of Chhattisgarh recently, it was Ruby, a police tracker dog, who came to the rescue. With her trained nose, she helped the police department find them. The sniffer dog is so good at her job that she was awarded the ‘cop of the month’.

According to Indian news reports, yesterday, for the first time in the Indian state of Chhattisgarh, a police sniffer dog was honored with the award, along with two police personnel.

Chhattisgarh: For the first time in Raigarh district, a police sniffer dog has been awarded ‘Cop of the month’, along with dog handler.

Santosh Singh, the Superintendent of Police (SP) in the Raigarh district, said that Ruby has helped solve many cases, including the Sarangarh Royal palace robbery case, by giving vital clues.

“In Sarangarh Raja Mahal, under the Sarangarh police station, two silver trays which were very expensive, worth about Rs6 lakh (Dh29,955.88), were stolen. Virendra (the dog handler), with the help of Ruby, recovered them and caught the accused,” the cop added.

“This month two police personnel, one from a legal section and the other a dog handler, Virendra, have been given the award of the cop of the month. Besides them, Ruby, who is our tracker dog, was also awarded,” he said.

Sniffer dogs are trained to use their senses to help police departments detect substances such as explosives, illegal drugs, currency, blood, and contraband electronics such as illicit mobile phones.

Talking about the monthly award, the police official said: “Every month the police personnel doing good work are encouraged by awarding them. Their photographs are placed in different police stations with some cash award as well.”