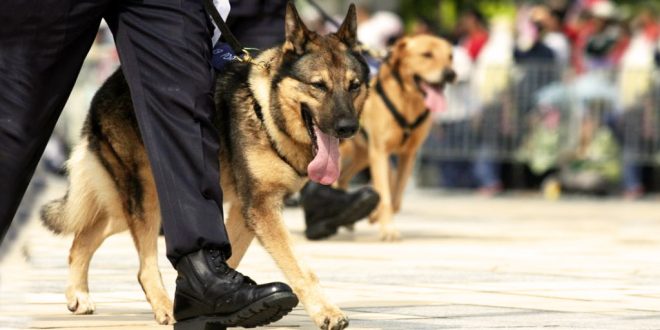 Retired Police Dogs Are Up For Adoption In Bengaluru

Retired Police dogs are now available for adoption in Bengaluru. A notice has been issued by the Karnataka police that allows all citizens of India to adopt a retired police dog.

These police dogs are specialized in detecting bombs, stop burglaries, murders and other criminal activities. After retirement, they spend their last days in the care of Animal Welfare Organization. The state’s dog squad is rated the second best after Tamil Nadu’s. Even injured canines in the force are up for adoption!

Bhaskar Rao, ADGP (Crime and Technical) says, “In Karnataka, there are about 280 police dogs. Each police dog gets a wholesome food which costs around Rs 8,000 to Rs 9,000 per month. After receiving a royal treatment during their years in service, they pass on within 10 to 15 days their retirement into an animal welfare organisation. Similarly every year, about 25 police dogs die. These police dogs share an emotional relationship with their handlers and when they are separated suddenly, they die. Handlers cannot adopt the dogs as their houses are very small.”

The police department primarily has three type of breeds German Shepherds, Doberman and Labrador. There are about 59 dogs in Bengaluru which are taken cared by 150 handlers. Training starts for puppies when they are three months old. When they are of 9 months,  they are trained in basic house manners, obedience, commands, tracking, sniffing and hurdle-crossing among other things.

“On an average, these police dogs live up to 12-13 years but retire by 9-10 years,” said Deputy Commissioner of Police (CARSouth) P Papanna.

Priya Chetty-Rajagopal, executive director, RGF India, who started the campaign “don’t shop but adopt” welcomed the home department’s decision. She, however, cautioned them to ensure that the adopted dogs are not used for illegal activities or for breeding purposes. Since the department cannot keep a tab over retired dogs that are sent to welfare organisations, this is a good move.