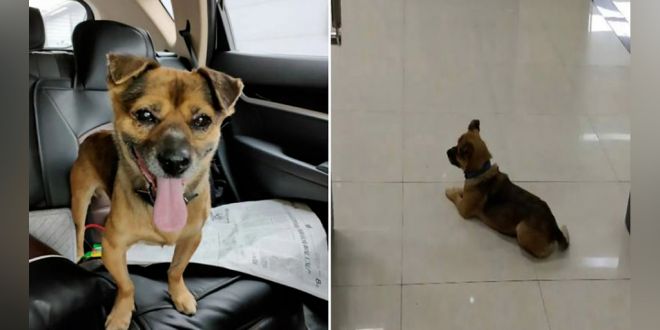 The coronavirus outbreak has been tough for animals as well. Be it pet owners abandoning their furry friends with the fear of contracting the virus, or the exotic ones who crossed boundaries in search of food, the pandemic has been equally painful for the fauna.

History has witnessed several tales of dogs who have gone a step ahead to be with their owners and vice versa. Known as humankind’s best friend, these angelic animals have also been helping many cope through these trying times. With that being said, a dog in China has made headlines for waiting at a hospital for three months after its owner died from the coronavirus.

The owner of Xiao Bao, a 7-year-old mongrel, was admitted to the Wuhan Taikang Hospital in central China’s Hubei Province, in February this year but died 5 days later from the virus. Xiao Bao, a loyal one, waited patiently at the hospital’s lobby for 3 months hoping to reunite with his owner. According to reports, the staff also tried to move the dog away from the vicinity but Xiao Bao found its way back.

Three months later, the hospital received several complaints about Xiao Bao causing a disturbance in the lobby, after which the staff called the Small Animal Protection Association that took it with them.

The story reminds us of Hachikō, a Japanese Akita dog, who loyally waited for his owner, Hidesaburō Ueno, for over 9 years following Ueno’s death.

By Sunday, Hubei had six existing confirmed COVID-19 cases, including one in severe condition and one in critical condition. The total number of asymptomatic cases under medical observation was 326 by Sunday, according to the commission.

The provincial capital Wuhan started a campaign on May 14 to expand nucleic acid testing in order to better know the number of asymptomatic cases or people who show no clear symptoms despite carrying the virus.

According to the latest figures released by the Wuhan municipal health commission, the city conducted more than 6 million nucleic acid tests between May 14 and 23. On Saturday alone, the city performed nearly 1.15 million tests.