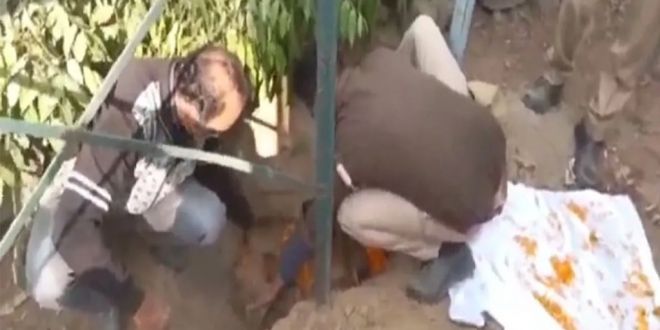 A dog that had been abandoned during the onset of the COVID-19 pandemic in Meerut and was being looked after by the PAC breathed its last on Tuesday.

The dog that had been mentioned by Prime Minister Narendra Modi in ‘Mann Ki Baat’ breathed its last in Meerut, Uttar Pradesh. The canine that had been abandoned by its owner at the beginning of the coronavirus outbreak was taken care of by the Pradeshik Armed Constabulary (PAC) personnel.

After its death, the dog was buried with full honor by the cops. PM Modi lauded the cops for helping the canine and selflessly caring for the dog.

Abandoned by the tea stall owner

Sub Inspector Umesh Singh, who was one of the cops helping the dog, said that a tea stall owner named Rakesh left the dog during the onset of the pandemic. When the cops learned about the canine, they named him ‘Rakesh’ and started feeding him.

The cop added that he was disturbed with the death of the dog and efforts were made to cremate it will full honor. Singh said that PM Modi also appreciated the PAC for taking care of the canine.

Reportedly, the dog fell ill a few days ago and died. It was cremated at Commissioner Park.

Dog assaulted to death by a lawyer in Dehradun

While on one side, the PAC personnel took care of the dog, there have been several instances where dogs were subjected to assault. In June this year, a lawyer living in Dehradun allegedly thrashed a stray dog to death for trespassing into his house. The accused, who was identified as Vinay Kumar allegedly assaulted the dog to death and his house help poured water on it. Both the accused were booked under relevant sections.