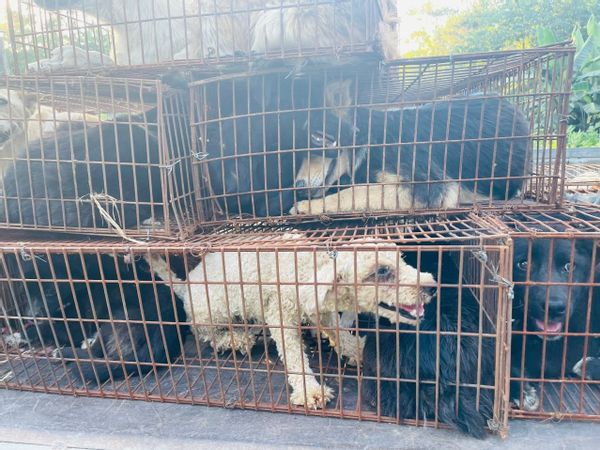 Animal rights activists in China have rescued as many as 68 dogs. These dogs were destined for slaughter at the annual dog meat-eating festival in the city of Yulin.

The festival has been facing strong agitation for animal activists and lovers worldwide for years now. But despite several campaigns, it is still celebrated annually in Yulin.

But this year, a team of activists managed to rescue 68 dogs after they intercepted a truck headed to the festival.

According to reports, the dogs were ‘terrified’ and ‘exhausted’ after having endured a long trip without food or water.

An activist said they were crammed inside rusty cages and were unable to move.

“It was so frustrating to watch trucks of dogs arrive in Yulin when the authorities were supposed to be stopping them and confiscating the dogs. So we decided to save some dogs ourselves and waited on the highway for the next truck to arrive,” said Liang Jia, a Guangxi activist.

The activist added the dogs offer them their paw-like home pets after being rescued.

“These poor dogs look sick, and thankfully now they will receive veterinary care, but who knows what diseases they could carry that would end up in the food market,” added Jia.

After the rescue, dogs were taken to a facility for treatment and recovery. According to reports, they will soon be transported to a shelter supported by Humane Society International.

“These activists are typical of a new generation in China who strongly oppose the dog and cat meat trades and are prepared to take action to see it ended in places like Yulin,” said Dr. Peter Li, China policy specialist for Humane Society International.

A few weeks ago, twenty homeless golden retrievers were rescued from meat markets in China by a team committed to finding and rehoming abandoned dogs.

The best part is that all the retrievers have now found new homes in Palm Beach County.